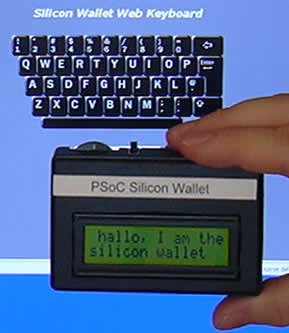 The Silicon Wallet fits a small plastic box, and can store hundreds of passwords, logins and secret codes. An alphanumeric LCD display fills the front side. It is battery operated and has no keyboards, just a wheel peeping out on one side, like the volume control in miniature radios. Turning the wheel you enter a secret 5-digit code. This number is the only one you have to remember from now on. It is like having a safe in your pocket, once it is opened, you can use the wheel to scroll through the information that is inside it.
The most amazing feature of the Silicon Wallet is the way you enter new information: instead of awkward miniature keyboards like the ones found in Far-East gadgets, or uncomfortable input schemes based on invariably-too-few buttons, Wallet’s input device is a single phototransistor.

By design, this “wireless” input technology requires just a web browser, and works on any combination of platforms and operating systems. Remarkably, it doesn’t require you to install any specialized software and drivers. On the security side, the script encodes data on-the-fly, one character at a time, with the intention to defeat RAM and cache hacking. Once in the wallet, information is stored into processor’s on-chip FLASH, which is hardware-protected from external reading. At last, I have found a fairly secure place for my password list.


The signals involved in this design are only apparently simple. CRT and LCD monitors work according to different processes, and although the images look similar to an human eye, the difference is very evident from a phototransistor’s observation point.

Both monitor technologies influence the design of a data transmission scheme. LCD monitors require substantial amplification and compensation of the DC offset superimposed to the signal. The difference in rise and fall times for LCD monitors suggests to use the same edge to measure intervals. Signal picked up from CRT monitors are ample, but need additional circuitry to fill the gaps between two consecutive peaks in order to reconstruct the original signal.