Make your own pinhole camera 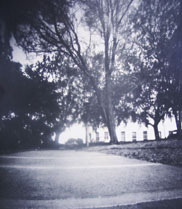 Follow these instructions to make your own pinhole camera and learn about how physicists use them.Pinhole cameras usually consist of a sealed box with a pinhole on one side and some film or photographic paper on the other side to record the image
Pinhole cameras allow light through a tiny hole, making pictures with a soft, blurred, dreamy effect (with practice, you may be able to take sharply focused photos).Light travels in a straight line unless it’s diverted, so light travelling from the base of an object will travel in a straight line through the hole and hit the top of the surface opposite the hole. This is why the image appears upside down.

Here we’ll make a pinhole camera that doesn’t use film, so you’ll see the image but not record it. Using greaseproof paper instead of film you can test the theory of pinhole projection for yourself and view the world upside down.

To do this experiment you will need the following items: :
two small cardboard boxes that are the same size
black paint
a pin
aluminium foil
greaseproof paper
black electrical tape
scissors.