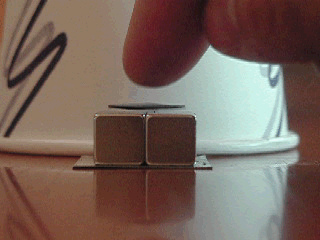 There are some materials that are more diamagnetic than bismuth. These include superconductors (which at this time require cryogenic temperatures to work), and similar materials that exhibit “giant diamagnetism” (also at very low temperatures).
We can do that by using four magnets. The poles of the magnets push on the diamagnetic material more strongly than other parts of the magnet. With four magnets, the four edges of the square of pyrolytic graphite will be pushed away from the four poles. If the square is slightly smaller than half the width of the four magnets (a little smaller than one magnet), then we can place it in the center, and it will be pushed to the middle and stay.

Since diamagnetic materials are repelled by either pole, we can place the magnets with alternating north and south poles, and they will stick nicely to one another.

This arrangement is discussed in excruciating detail on our Message Board. The pyrolytic graphite plate floats above the magnets and springs back when you push it down with a finger.


Since pyrolytic graphite is a little more diamagnetic than bismuth, it makes a great substitute for bismuth in the levitating magnet project.

Below is a picture of a magnet spinning between two pieces of pyrolytic graphite, separated by a small piece of wood. The large magnet above it is not shown, but this is the same device we built earlier using bismuth.