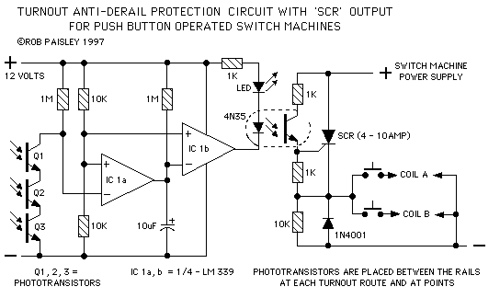 This is a circuit that will give an audible warning that a train is entering a particular section of track. The detector also has a LED that indicates when a train is entering or leaving the block.
This circuit is based on one that is installed at the London Model Railroad Group’s ‘O’ Scale layout and used to warn the “Hidden Yard” operator that a train has entered his control block. Due to the location of this yard the operator cannot see a train that is entering or leaving his blocks.

When a train enters the Hidden Yard block the operator will here a short warning tone and then see the LED is on. If a train is leaving the LED shows the yard operator when it has left his block and he can resume staging operations in the hidden yard.

Approaching Trainp> When an approaching train covers the (A) sensor the ‘D’ section of the LM339 triggers the timer IC 1 which produces a pulse of about 1/3 of a second.

When the output of IC 1 is high the IC 2 timer will oscillate and produce a short warning tone from the speaker.

When the approaching train covers the (B) sensor the ‘B’ and ‘C’ section of the LM339 disable the (A) sensor so that the IC 1 timer cannot be re-triggered by the moving train.

When a departing train covers the (B) sensor the ‘B’ and ‘C’ section of the LM339 disable the (A) sensor so that the warning will not sound.

Approximately 5 to 8 seconds after the (B) sensor is uncovered the (A) sensor will again be active and the next approaching train will trigger the warning tone.

Anytime that the (B) sensor is covered the LED in the circuit will be on. The LED can be used to show when the end of the train has fully entered or exited the block.

The “C” section of the LM 339 provides a short delay between the time that the (B) sensor is uncovered and the (A) sensor is again active. This will allow the train to clear the sensors without triggering the approach warning.

To increase the duration of the warning tone: Increase the values of the 330K resistor or the 1uF capacitor at timer IC 1.

The values of the 100K resistor and 0.01uF capacitor at timer IC 2 will produce a 900Hz warning tone, these can be adjusted to suit your needs.

The 47 ohm resistor at the output of IC 2 controls the loudness of the warning tone. Some testing may be needed here to find the desired volume.

The speaker can be a 2 inch, 8 ohm type such as those used in old transistor radios. The output of timer IC 1 could also directly drive a piezoelectric buzzer if desired.

If protection is needed for both ends of a block then additional phototransistors can be connected in series with the (A) and (B) sensors and placed at the opposite end of the block.

The schematic shows two LM 555 timers to make the diagram less complicated but one LM556 could be used instead.