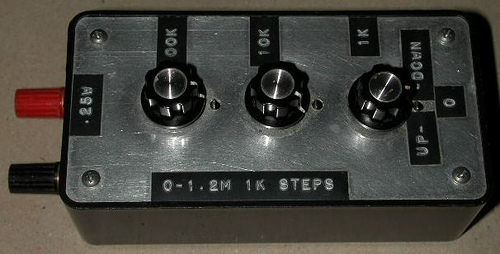 This is an inexpensive way to make a stepped resistance box using a Single Pole – Twelve Position rotary switch and eleven resistors of equal value. As there are eleven resistance steps for each rotary switch instead of the usual ten there is one step of overlap between switches.
The resistor tolerance can be 1, 5 or 10 percent, 5 percent is a good choice for most work. The wattage of the resistors depends on the maximum voltage that can be expected across a particular resistor. Lower resistances should be of higher wattage.

Two types of rotary switches are available, shorting and non-shorting. Either type will work but the non-shorting type will create a full switch cycle resistance circuit between each step. This may not be desirable in some applications.

This is a photo of a 100 Ohm, twelve position switch. One-half watt resistors were used rather than one-quarter watt due to the expected higher current flow for these lower value resistors.

Another possibility would be to connect a number of resistors of equal of various values in series on a terminal strip or perhaps a strip of wood with the resistors soldered to brass or copper nails. Different resistances could be sellected using jumpers connected to any two terminals or using three terminals in series/parallel arrangments.

The resistor strip could also be used as a potentiometer.