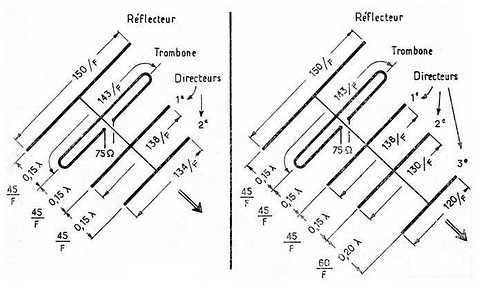 Following the frequent demands on the topic here is detailed with picture the construction of an Yagi antenna calculated for the FM broadcasting band 88 – 108 MHz. The central frequency used for our calculations is 100MHz. This antenna is less difficult to construct than the one presented on the previous page.
The goal of this page is to help you to construct an antenna, not to make the theory of this one, theory complex strong to staying it. Here are some definitions of basis therefore. The name of axis of an antenna call the BOOM. The antenna uses a dipole says ” trombone ” that is the only element a few delicate to achieve. Contrary to what lets believe diagrams above the two tubes of the trombone are not to dish ” but disposed perpendicularly to the axis of the antenna. On the photo below taken perpendicularly to the antenna one doesn’t see the two tubes, but in ” alone appearance ” one. Directors increase the directivity of the antenna (sense of the arrow) but as the gain, it is because of them that with 4 elements the antenna to a Gain of 6dB and 5 elements procures a Gain of 8dB. The reflector return the bundle of wave ” collected ” by directors toward the dipole, but his major role is to protect the antenna against the parasitic signals coming from the rear. In any case an antenna must be raised in relation to background to work well. 1 to 2 length of work wave is counseled. For F = 100 MHz, the Length of wave is 3Meters (9.85 feet) …

The BOOM in our case it is in wood but one little also to use an another insulating, the PVC for example. If you decide to use a square or a U of aluminum stay up to isolate elements of the antenna of the BOOM.

After his building it will be necessary to protect it by a varnish, the painting or the silicone so that he doesn’t distort itself to inclemencies.

Start per drawing on one face a first reference mark to 3 cm (1.18 inch) of the beginning of the batten, draw 3 other distant reference marks of 45 cm (17.71 inch) then the some of others. Mark the intersection to the middle of the batten on every reference mark. If you choose ” the option ” 5 elements stay up to pierce the BOOM with a first interval to 60/F = 60cm (23.62 inch) for 100MHz.

Pierce 4 holes of diameter 8,5mm (0.33 inch) while using reference marks previously tracings. Council: Pierce a before-hole first to 4 or 5 mms (0.15 or 0.19 inch) of diameter. Attention to the perpendicularity.

Pierce a hole of 4 mm (0.15 inch) of diameter then on the opposite face in order to cross the hole preceding perpendicularly. This hole will serve to pass a bolt of 4mm x 30mm (0.15 x 1.18 inch) to immobilize and to center elements on the boom.


To permit the liaison of the coaxial cable to extremities of the dipole you have two solutions:

Either made it to you through the intermediary of two necklaces.

After the drill came the time of the saw…

Do a slash of 1 cm (0.39 inch) of depth (split) to surroundings of every extremities of tubes of 8mm (0.31 inch). It will permit a better tightening by necklaces, of Circles of 6mm (0.23 inch) that will slip inside himself.