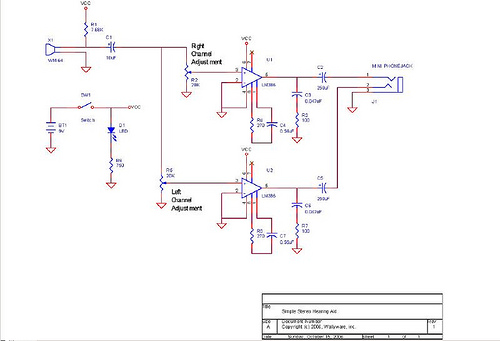 Hearing loss can be caused by a number of factors including excessive exposure to loud noises, the ingestion of certain drugs (ototoxins), and most commonly, getting old (presbycusis). In most cases, the process is so gradual that we do not even notice it happening.
An examination of the design shows that the sound is detected by a Panasonic WM-64 electret condenser microphone. The output is then fed into two 20K potentiometers that feed a pair of LM386 audio amplifiers. There are two amplifiers because you have two ears. And often, the hearing loss is not the same for both. This is particularly true if you’ve ever used a rifle. In my case for example, the right ear is weaker than the left ear.

The small RC network formed by the 270 ohm resistor and the 0.56uF capacitor provides about a 6dB boost in gain starting at 1Khz. This was added because most hearing loss occurs at higher frequencies in the audio range. And it is these frequencies which allow us to hear and understand consonants.

The outputs from the amplifiers are then fed into a miniature phono jack like what you would find on an iPod. This allows the use of low cost and ubiquitous ear plugs and headphones. The whole design along with the battery, power switch, circuit card, and headphone jack could be built inside of an Altoids can which could rest on the table in front of you or in your pocket.


To adjust the circuit, set the volume to minimum on both channels before putting on the headphones. Turn on the television so you’ll have a source of audio and apply power to the circuit. Increase the volume to an acceptable level in the left channel. Then adjust the volume in the right channel until the sound is “centered.” Please exercise caution when making these adjustments and using the circuit – the point is to help your hearing and not harm it.

If you find that this circuit helps then I would strongly recommend that you consider getting real hearing aids as soon as possible. You’ll not only experience much better correction and audio quality but, you’ll also be able to hear the phone ring again.