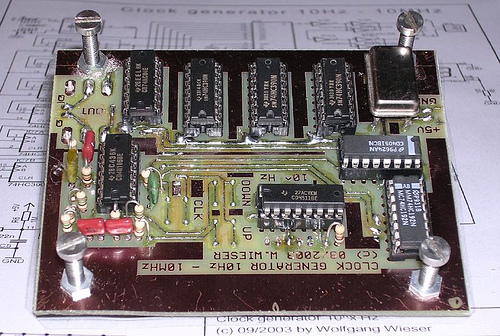 The device presented here can generate a complementary clock signal at frequencies of 10Hz to 10MHz in steps of factor 10. Thus, I chose to call it 10xHz clock generator (with x being a number between 1 and 7). It can also be used to manually create clock impulses using a press button.
The frequency is selected using two press buttons/swiches: S1 to switch the frequency up by a factor of 10 and S2 to switch it down. The frequency selection is determined by the three pins A,B,C at the 4051 which are just the binary representation of the x-value. 7 (i.e. A,B,C being HIGH) selects the direct signal from the crystal-controlled oscillator OG1 while lower numers/combinations select lower frqeuencies from the divide-cascade built-up with three 74HC390 chips.

Note that when pressing the “up” button when value 7 is active will switch back to value “0” (i.e. manual clocking, see below) while pressing down at value “0” will step to 6 instead of 7. I knew this bug before building the circuit but I decided that implementing the correct behavior was not worth the additional circuicy.

The CD40106 is used to debounce the switches. Especially note IC1B and IC1D which form a small negative impulse when pressing the up/down key. This is needed to make the frequency change when pressing the switch instead of when releasing it which would be counter-intuitive/unexpected behaviour.

When value “0” is active, you can do manual clock generation by pressing S3.


The output stage is done with two parallel 74AC04 inverters which can source and sink up to 24mA each with slew rates at least as good as the HC family. Due to the fact that the complementary signals travel through a different number of inverters, they are not exactly in sync but the delay of about <7ns should not make big trouble.

Two real on/off switches (i.e. no semiconductor stuff), S4 and S5, can be used to actually decouple the clock generator from any attached circuit.

(Note: Due to different internal resistance, using two AC04 in parallel will not result in 48mA current but something between 24 and 48.)

Note: The design above leaves away all the bypassing capacitors. That is because I chose to solder them directly on the IC socket pins for optimum performance and because otherwise the required signal lines proved to make PCB design much more complicated in the past.