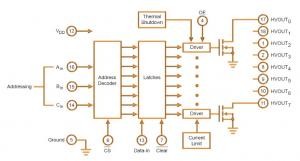 
The MIC4807 is an 8 channel, addressable low side driver and is guaranteed to deliver 100mA minimum at up to 80V per channel. This note discusses the operation of the MIC4807 and shows how it can be used as a display driver with dimming for incandescent indicators. The MIC4807 contains 8 low side drivers that are controlled by addressable latches. Open-drain, N-channel MOSFETs of approximately 5.1 Ω “on” resistance are used as output devices. The MOSFETs are designed for operation to 80V.