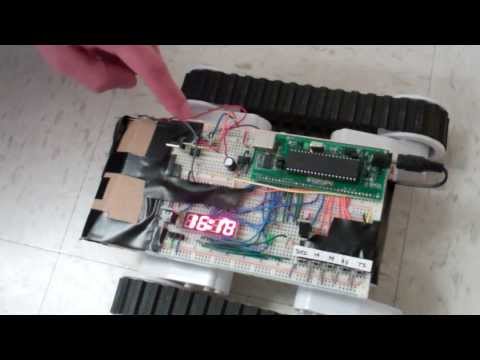 We implemented a prototype for a moving alarm clock which runs away from the user when they try to silence the alarm. It has all the features of a “regular” alarm clock: settable time and alarm, snooze, and alarm on/off. The alarm clock displays the time in 24-hour format on a LED seven-segment display. The whole unit is mounted on a chassis with caterpillar-style wheels driven by two small DC motors. A proximity sensor is mounted near the snooze button which is activated whenever the user’s finger nears the button, causing the clock to move away. It is intended to lure the user out of bed when the alarm sounds. Instead of being able to hit snooze three or four times and sleep in, the user will have to get up and chase the clock to silence it.