Do you want to speed up to a “Long Term Evolution”? With Quectel modules it´s already possible… 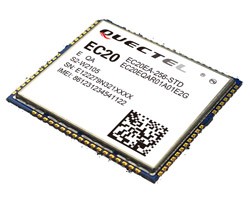 Company Quectel brings to a market its first high-speed module EC20 which you can try yourself. More than fifty developers worked for over ten months on this module.

We´d like to share with you its parameters, as well as hints, which can make your work with this module easier – this is our biggest bonus to sale of modules from company Quectel.

Module EC20 arises from the M10 GPRS module and the UC20 UMTS module. These modules can be designed to a PCB in a way that you have ensured variability and a possible replacement in case, that you wish to have one board for several solutions …


From theory to the praxis…

Discussions about LTE already last for some time. One LTE transmitter (800MHz) manages up to six times bigger area than one UMTS transmitter (2100MHz). LTE protocol is already from the beginning (in contrast to UMTS) written as a high-capacity with a fast response. The first phase of area coverage is usually equal to speed of UMTS uplink/downlink. After reaching almost a 100% coverage, then usually starts the second phase, which actually speeds up to current theoretical speeds of 172,8Mbps (downlink) and 57,6Mbps (uplink).

Let´s have look at frequencies

And at last – advantages of EC20

The EC20 module also supports „emergency call“. In the time of creation of this article it was decided that eCall will be compulsory in vehicles from April 2018. In every way, company Quectel is already prepared and supports this system in almost all its modules.

The eCall function also related to another advantages and functions in the module, for example:

Do you want to speed up to a “Long Term Evolution”? With Quectel modules it´s already possible… – [Link]