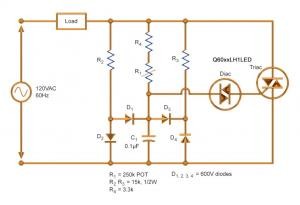 
Light Emitting Diodes (LEDs) are fast becoming the most popular lighting option. Industry forecasts anticipate the market will continue to expand at an annual rate of 20% from 2011 to 2016, with the greatest growth coming in the commercial and industrial lighting sectors. As incandescent lamps have been made largely obsolete, given the U.S. government’s mandate to save energy, they have frequently been replaced by LEDs due to their long life (typically 25,000 hrs.) and the ease of adapting them to many different socket and shape requirements. However, LED lighting control presents a few problems not encountered with incandescent lamps. For example, with much less current from the LED load, normal types of triacs may be challenged in terms of latching and holding current characteristics.

This application note discusses about controlling LED lighting using Triacs and Quadracs. Triacs make up the heart of AC light dimming controls. Triacs used in dimmers have normally been characterized and specified for incandescent lamp loads, which have high current ratings for both steady-state conditions and initial high in-rush currents, as well as very high end-of-life surge current when a filament ruptures.