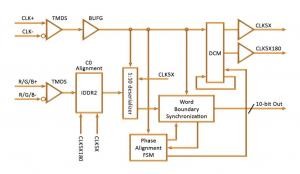 
This application note describes a set of reference designs able to transmit and receive DVI or HDMI data streams up to 700 Mb/s using the native TMDS I/O interface featured by Spartan®-3A FPGAs.

The DVI and HDMI protocols use TMDS at the physical level. TMDS throughput is a function of the serial data rate of the video screen mode being transmitted. This in turn determines the Spartan-3A FPGA speed grade that must be used to support this throughput.