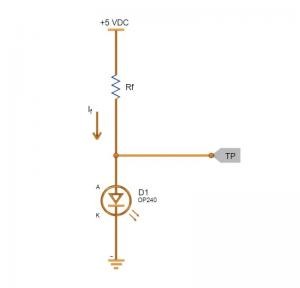 
This application note is intended to assist someone with little or no experience in connecting basic optoelectronic assemblies. A basic optoelectronic sensor assembly consists of two separate components. The first component that must be considered before making electrical connections is the LED, which is called the “emitter” and which will typically emit infrared light. The second is the phototransistor which is called the “sensor” or “detector” and which responds to the infrared light. To ensure good photo-coupling between the emitter and detector, it is recommended the user consider using a standard Optek assembly. The Optek OPB815WZ is a very good example of an Infrared Slotted Switch and will be used in this example.