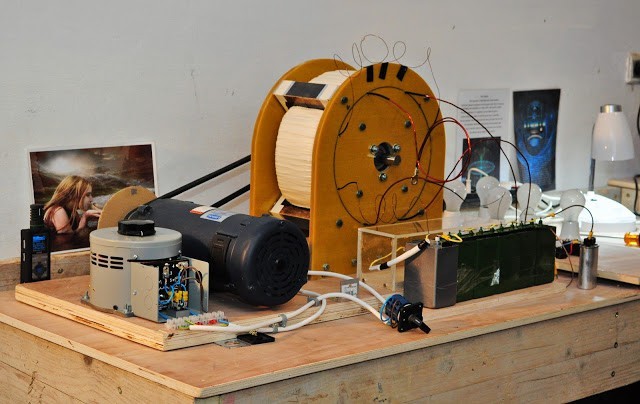 “This new power for the driving of the world’s machinery will be derived from the energy which operates the universe, the cosmic energy, whose central source for the earth is the sun and which is everywhere present in unlimited quantities.” –Nikola Tesla

Many smart creations have been attributed to Tesla, one of the most brilliant scientist of the past century. The Tesla generator is probably the most famous together with the Coils.

Now, you can download and make your own generator since mr. Robitaille released under the open source license his patent covering this type of electrical machine. Enjoy!

Inventor, James M. Robitaille, and the Fix The World Council have released an energy generator, inspired by Tesla’s 1894 “Electric Generator” (Patent No. 511,916).  Modified and modernized, the plans for this Quantum Electric Generator (QEG) have been released to the public and made open source.  The machine is strong enough to power a household and is the size of a modern gas generator.  According to the council, the machine is “scaled to produce electrical power in the range of 10-15 kW (kilowatts) continuously, and can be set up to provide either 120 Volt or 230-240 Volt single phase output.”


For generations, we have been told that Tesla’s inventions and claims were not real, while the patents have blatantly resided in waiting, ready to be used.  By tapping into vibration, this “high-powered self-resonant oscillator” can lead us into a new era of energy output.

You can view and download the plans here and here.  Spread the information and host the plans on your own server.