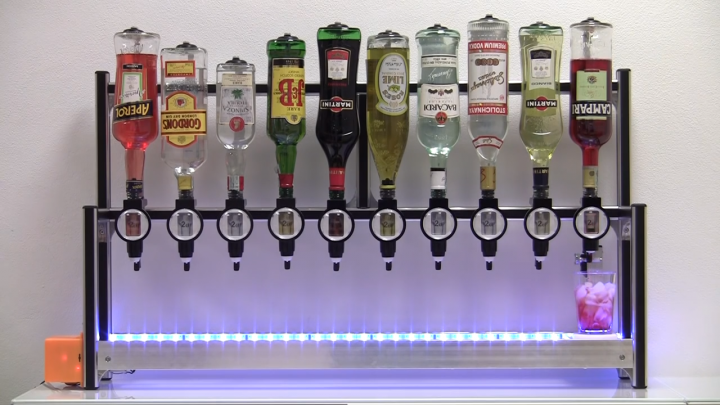 Based on RandA, this machine can prepare cocktails, by drawing the quantities from dedicated dispensers, according to recipes dowloaded from the webpage from which the drink has been requested. Learn more in this first post.

If one has the possibility to relax and maybe doesn’t have to get behind the wheel for a while, the evenings outside call for cocktails that will combine the pleasure of the alcohol with the refreshment coming from some ice cubes. If we go to the bar, we’ll find a bartender juggling with the tumbler, so to serve us our favourite drink. On the other hand, if we are at home with friends, we have ask to a friend who is adept at preparing drinks, or to roll up our sleeves and get down to do it ourselves. There is also a third possibility, indeed a futuristic one, but one that has already been experimented in some clubs, pacifically “invaded” by robotics: to rely on a cocktail-making machine. Things like this do exist in the professional world, but can also be self-built, by showing our determination as makers and by browsing the pages of Elettronica In! In fact, we saw a similar machine at work and, conquered by the wish of having a perfectly mixed cocktail with the right ingredients, we got down to it and we built a robot capable of doing it.

Thus Drink Maker was born, a project that can be carried out with some initiative by him who knows how to practise with mechanical parts, and naturally with electronics. It is also available in a version that can be assembled, however, for those who want to recreate their own technological corner bar at home, and to amaze their friends by making them “order” their favourite cocktail from the smartphone or the PC, so to see it prepared live by the robot. 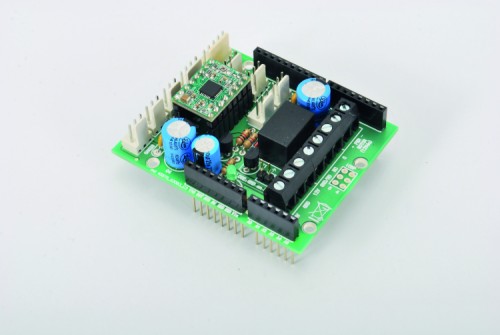 The shield creates the interface between Randa and the electromechanical part of the machine.

Our robotized drink-making machine is a chassis composed by aluminium extrusions, upon which dispensers are applied in a row: they are activated by a rear button, pressed by a lever commanded by a servomotor. Each time it is activated, each dispenser supplies a predetermined drink quantity, in our case corresponding to 2 cc (20 ml). Each dispenser is mounted upon a bottle carrier, that allows the insertion of the nozzle as gasket in the bottle neck, so to give stability to the whole.


The whole stays on the machine’s raised part, fixed at the base on which the mug holder cart runs on the axis in a linear way. It runs by means of some ball casters on the cavities of the aluminium extrusions, that are longer than the chassis. Behind the cart a servo control that activates the dispenser is fixed as well, thus each time the cart brings the glass under a dispenser, this last one is activated and pours his dose for the number of times set by the system. To avoid that the cocktail is shaked up to the point of pouring the fluids out of the glass, during the passage from a dispenser to the other one, we saw that the cart’s speed changes in a progressive way, by starting out slow to reach the top speed after about a second, and then to slow down up to the point of stopping, after another second. The cart’s movement is achieved by means of a dented belt that bites a pulley (also dented), and activated by a stepper motor placed on the inferior part of the chassis. The motor is managed by a dedicated controller and lined to the start on the basis of a limit switch that has been placed all to the left, and that is stimulated by a specific protrusion of the cart. The beginning of the course corresponds to the first dispenser, thus during the building phase of the machine you have to make sure to place the limit switch so that its lever is pressed when the cart has the glass centered in respect to the first despenser’s nozzle.

In order to make it possible for the mechanics to carry out what has just been described (that is to say to bring the cart with the glass under the bottles needed to prepare the required cocktail, and to receive from the dispenser the drink quantity that has been indicated), a quite refined electronic control is needed. In our case, this is achieved by combining Raspberry Pi, our RandA board (a bridge between Raspberry Pi and Arduino), a specific shield and a motors driver, and in the end this is the same that has been used for the 3D 3Drag printer’s project. The whole sequence of the movements needed to prepare a cocktail and to bring the glass containing it back (to the beginning of the machine so that it can be picked up), is decided on the basis of the composition of the cocktail itself. This one is chosen by the user by means of a customizable web interface. Thus we have a part of the electronics that enables us to choose the cocktail from a database (previously prepared by the system manager and that can be composed at leisure). Another one translates the ingredients of the cocktail itself in mechanical movements (moving the cart, pressing the dispenser’s button…). Finally, another part physically controls – by following the corresponding instructions – the step by step motor and the servo control to operate the appropriate actions.