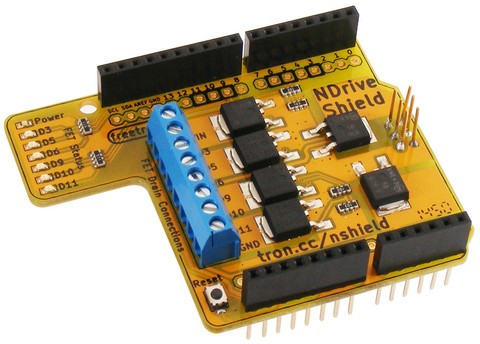 Wandering about IKEA you can find all sorts of interesting things to work with, such as photo frames to use as enclosures, neat storage units, and also a growing range of lighting products. Thanks to a lot of these using low-voltage LEDs they can be hacked and controlled with an Arduino, and this has been demonstrated on on the tronixstuff website.

Their example uses an IKEA DIODER RGB LED strip, which works well with our MOSFET shield for Arduino – as each output can control one of the LED colours and thus allow for a range of lighting effects generated by the Arduino sketch. Furthermore they’ve also demonstrated how to control them remotely using an Android phone. A quick demonstration of the lights is shown in the following video:

To learn how you can do this yourself, visit the tronixstuff project page. And for more, we’re on twitter, facebook and Google+, so follow us for news and product updates as well.


Need to control up to six high-current signals from your Arduino? Or add high-powered LEDs to your own lamp project? Save time and space with our N-Drive Shield for Arduino:

With the N-Drive Shield you can directly control up to 6 separate high-power loads such as high-intensity LEDs, lamps, motors, and relays. Incorporates 6 N-channel MOSFETs, each capable of switching up to 60Vdc at 20 Amps. That’s enough to drive massive loads such as 30W and 60W RGB LEDs capable of burning your eyeballs right out of year head!

Each MOSFET is connected to an Arduino pin with PWM capability, so you can vary the power delivered to each load individually. For much more information, tutorial and to order – check out the N-Drive product page.