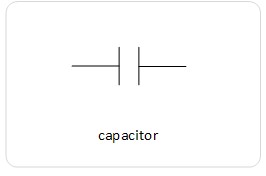 Voltage suppressors are used to protect circuits from unwanted transients, when other devices like diodes and capacitors fail to do so. Transient effects have various sources and are able to damage the connected parts and ICs if not properly measures taken. In this article we will discuss about the various transient voltage suppressors and their uses. We will cover, TVSs, Varistors, Multilayer Varistors, Surgestors and Polyswitches etc.

Bypass capacitors are very often used in logic and power systems to reduce unwanted voltages to reach ICs and other sensitive parts and to clean the power rails, but are limited to low power applications such as RC snubbers and decoupling of digital logic rails. For decoupling a digital rail a capacitor in the range of 0.01-0.22uF is often used and for decoupling a power rail a 0.1uF and up is used, connected form power line to ground. Capacitors are low cost, simple to apply, have fast action and are bipolar but have uneven suppression and may fail unpredictably. 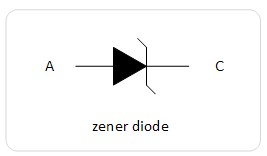 Zener diodes are also used to protect sensitive circuits from unwanted voltages in a way of clamping low energy systems that run at high frequencies such as high speed data lines. They are low cost, fast in action, have specific clamping voltage, they are easy to be used and work bidirectional, but can only handle low energy and fail open (which can hurt the circuit). They are mostly used for regulation than transients. 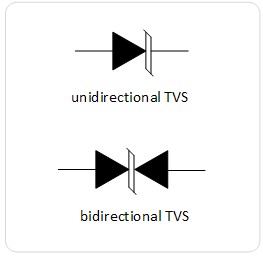 Transient voltage suppressor diodes or TVSs are semiconductor devices used to clamp transient voltages and current, such as electrostatic discharge, inductive switching kickback, induced lighting surges etc. TVS are used for diversion or clamping in low voltage and low energy, modest frequency systems and are way more reliable than a diodes. They come in unipolar and bipolar versions. Unipolar TVS breaks down when the specified breakdown voltage is exceeded and pass current in one direction, in the opposite direction of the arrow. In contrast bipolar TVS can handle current in both directions. TVS are invisible to the circuit they are placed to until a transient appears. When a transient appears, TVS clamps instantly to limit the spike to a safe voltage level. The breakdown voltage of TVS should be selected to have a breakdown voltage greater than the working voltage of the circuit protecting. Some of the advantages of TVS is that they are fast, easy to use and fail with short-circuit. Some of the disadvantages is that their high capacitance limits the frequency they can be used, they can be used in low energy systems and are more expensive than Zener diodes and MOVs. 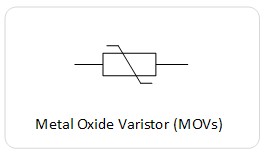 Metal oxide varistor or MOV is a bidirectional semiconductor device that acts like a voltage sensitive variable resistor. It’s made of various metal oxide p-n junctions placed in various directions and when the voltage across its leads exceeds a specified voltage they appear to have a very small resistance. The breakdown voltage is defined during the manufacturing process and can pass current in both directions, so can be used in DC and AC circuits. MOVs are fast, low cost, easy to use and handle more power than TVS. Also when they fail they short circuit. The disadvantage of MOVs is that they have moderate to high capacitance, thus limiting their use in lower frequency systems. MOVs are usually placed across mains input along with a series filter inductor and a fuse to protect the MOV itself. When a transient appears they switch from high resistance to low resistance this passing the excess current through. They can absorb a large amount of power for short periods of time and smaller amount of power for longer periods. 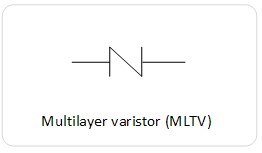 Multilayer Varistor or MLTV is a surface mount variation of MOV. Due to the surface mount contacts MLTVs have lower self-inductance and series resistance allowing for much quicker response times, typically less than 1 ns. The energy rating of MTLV are lower than other types of varistors but they can survive many thousands of strikes at full rated peak current. They are used on low voltage (3-70V) systems with modest frequencies. They are fast, compact and bidirectional, but more expensive than other MOVs and their high capacity limits their use on high frequency systems. 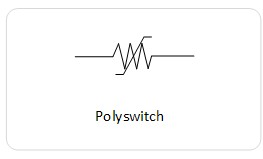 A polyswitch is a positive temperature coefficient resistor that stops the current from passing when a specified temperature is reached. In normal temperatures the resistance is low and current passes through easily. When the current rises enough (trip current) then resistance is increased dramatically and current flow drops. The polyswith will reset if the holding current is reduced and the device is cooled to normal temperatures. They often used in speakers, power supplies, battery packs, motors etc. They are low cost and easy to use, but requires a cooling down period to reset. 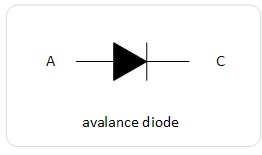 Avalance diodes are designed to break down and conduct at a specified reverse-bias voltage. Their operation is similar of a Zener diode but the breakdown occurs using the avalance effect. Unlike Zener diodes, avalance diodes are available with high breakdown voltages as high as 4000V. They are placed in circuit in reverse biased direction and in this state they don’t interfere with the circuit. If the voltage across it exceeds the breakdown voltage then the diode passes the excess current to ground. Avalance diodes are often used in low voltage, high speed logic applications and are very fast (<1ns response). Also their shunt capacitance is low (50pF).

Gas discharge and spark gap TVSs are used for diversion of current in very high energy and high voltage applications. Their high energy capability can go up to 20kA and their leakage current is in pA range. Disadvantages of them is that cost more than other methods and are slow in response. 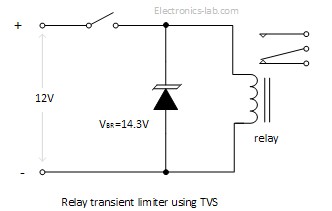 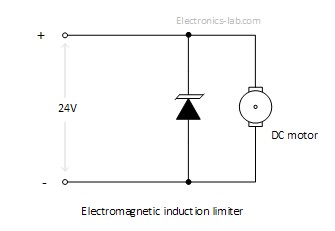 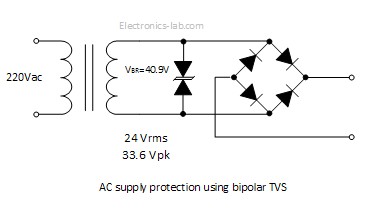 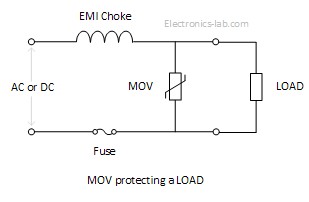 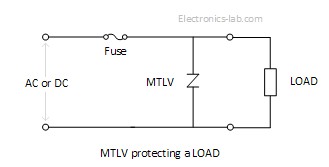 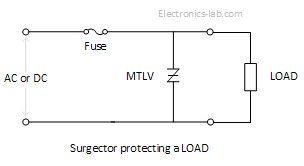 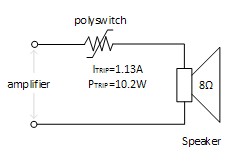