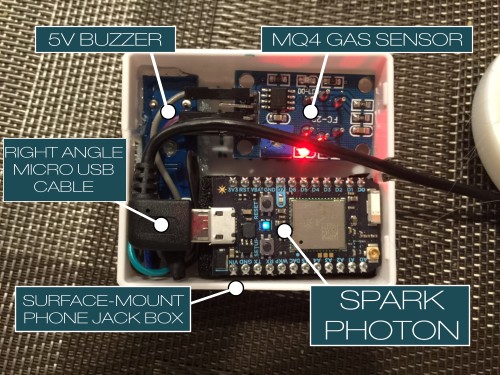 Stefan over at Hackster.io has written an article detailing his DIY Wi-Fi gas detector that sends SMS alerts:

Hey guys, back with another little project that I’ve been fiddling with for the past week. With kids around, every parent is thinking how to make their home safer for the little ones and for everybody in general. One of the most dangerous thing in the house can be the stove and since we have a gas-powered one, I always wondered why there are no simple gas detectors that can be used around the stove, just to alert instantly that gas may be leaking.
Well, that was the moment when I decided to build one of my own. Having a Particle (Spark) Photon lying around, I decided to use that as a foundation for the project. I like the fact that they are very small and cheap, and also can be flashed over the Wi-Fi. Having that settled, I needed the gas sensor and some kind of alerting system.