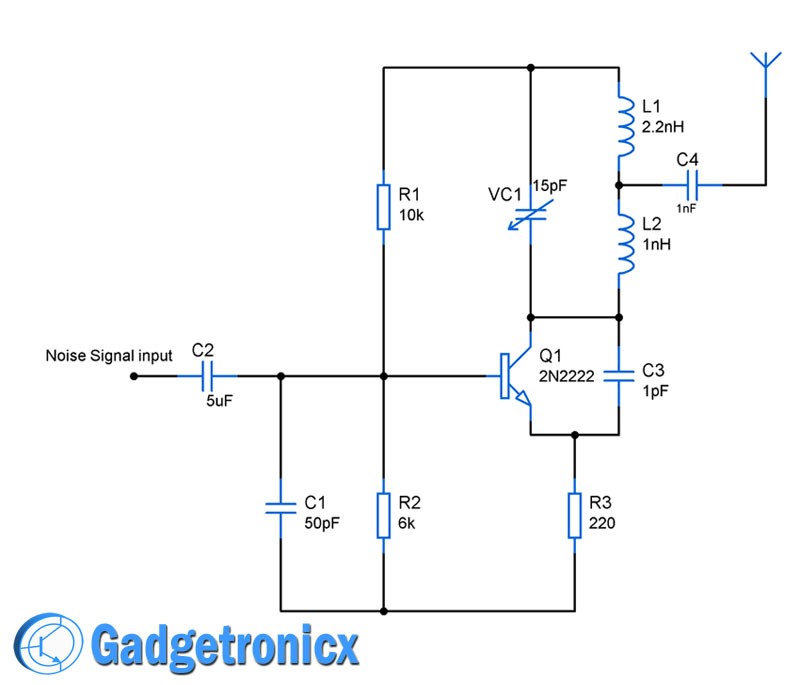 Cell Phones have became an essential gadget in our day to day life. But it will be annoying when used at inappropriate places like hospitals, schools, theatres and so. For this purpose Cellphone Jammer circuit is used to block the signals received by the cell phones ceasing them to work properly. But in some countries using Jammers are prohibited and will be penalized if you do, so make sure you are legally allowed to build and use this circuit.

Generally Cell phones operate at a particular frequency which depends on the network and technology they are using. But usually most of the mobile phones operate at a band between 800Mhz to 950 Mhz. The above circuit uses similar operating frequency range which will cancel out signals from the Base stations to cell phones. This in turn will confuse the cell phones and cease them from working.

The working of this circuit starts with feeding a random noise signal signal as input. The signal can be of anything (square, sine or speech signals ) which is fed to capacitor C2 to remove the DC components in it. The signal is then fed in to a RF oscillator built around high frequency NPN transistor Q1 2N2222. Resistors R1 and R2 are used to fix the biasing voltage to the base of the transistor.

Based on this equation we need to fix cap value as 11pf to obtain the frequency range of about 850Mhz approximately. You can use this equation to fix the LC values required for you desired output frequency.