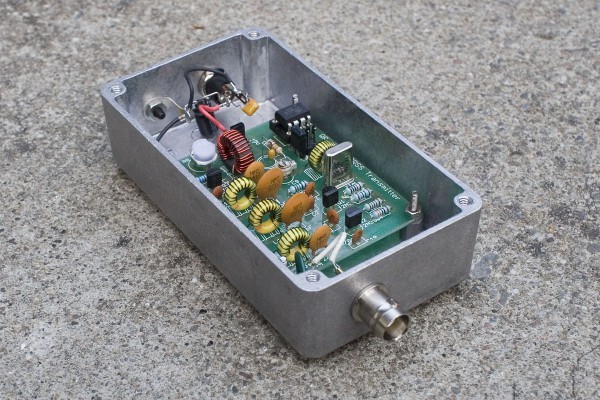 My first “proof of concept” at putting together a beacon for this band was to connect an N0XAS PicoKeyer in beacon mode to my Pixie 2 transmitter. With the PiicoKeyer, if you insert the prosign BN at the end of stored message #1, it will automatically repeat. Unfortunately, my older version of the PicoKeyer will not power up again in beacon mode if power is lost. This was taken care of in later versions, but it meant that I wouldn’t be using this particular version of the PicoKeyer in the final version of the beacon. My Pixie 2 put out about 170mW on it’s original frequency of 7030KHz when powered by 12V, but this dropped to an encouraging 5-10mW at 3.6V (3 x 1.2V NiMH cells in series).
For the final version, I wanted all the electronics to be on one single board. At that point, I was thinking about purchasing a PicoKeyer chip from N0XAS and building the keyer, Manhattan-style onto the same board as a Manhattan-built transmitter. Then I remembered the Hans Summers QRSS Transmitter that I had built a few years ago. After a brief flirtation and a lot of fun with QRSS on 30M, the board sat languishing in a box.