Designing and Building a binary clock 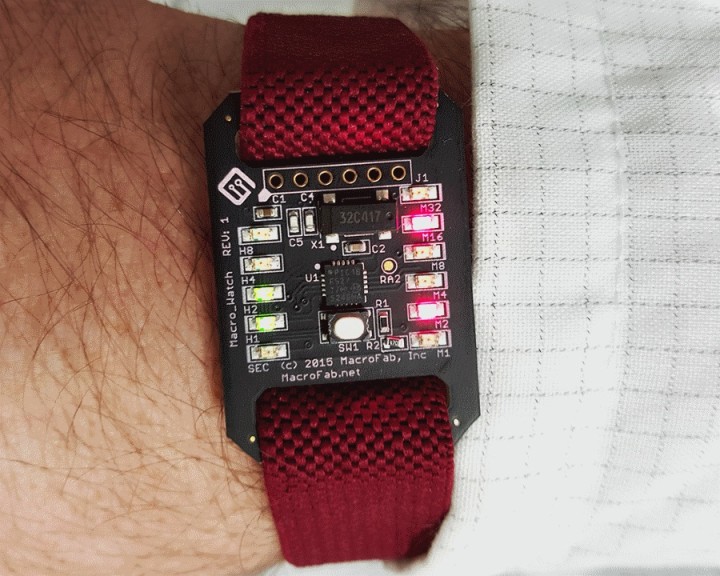 Parker Dillmann from macrofab.com has designed a wrist LED binary clock based on PIC16F527 Microchip mcu.

The Macro Watch stemmed from those constraints. I picked the PIC16F527 microcontroller by Microchip to be the core of the watch because it was the cheapest MCU I could find that had enough I/O and I knew at least a little bit about it in terms of writing code for and programming. The watch shows time in binary since doing so requires less LEDs to display time than the usual watch patterns, driving the cost down. The least expensive SMD 32.786KHz crystal on Mouser (part # ABS25-32.768KHZ-T) was used to make the PIC16F527 run in “LP” mode (Low Power Crystal Mode) and help increase the accuracy of the time keeping without blowing through the battery quickly.

The PIC16F527-I/ML is the QFN version of the PIC16F527 and I used it as it was the smallest package available. To power the watch a CR2032 battery holder was picked — it’s a standard size battery and has decent capacity for a coin cell. To reduce board area and further drop the cost I chose to use one dropping resistor for the entire LED bank. The idea was to matrix through the LEDs one at a time. This will come into play later as being a bad idea. The schematic took only a couple hours to fill out with most of that spent designing the PIC16F527-I/ML and battery holder in Eagle.