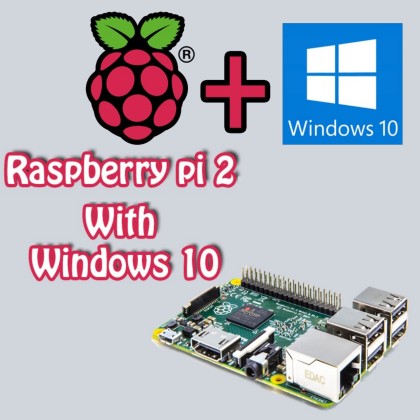 Let’s experiment with the embedded version of Microsoft operating system, by installing it on Raspberry Pi, and by building our first applications.

Before throwing ourselves headlong in the field of the technical features, we will list the requirements needed to test the operating system:

The official installation procedure requires the usage of a machine having Windows 10 installed; in truth there are some non official methods (found on the Internet) in order to install Windows 10 on Raspberry Pi, even if having previous Windows versions, OS X or Linux. In this occasion, however, we will limit ourselves to the official method.

Let’s start, therefore, by preparing our Raspberry Pi for the installation: the first operation to execute regards the download of the tools and of the operating system, that must be carried out. An ISO will be downloaded from it, that is named “IOT Core Rpi”; by double clicking on the file the image will be mounted and a virtual drive will be assigned to it: there we will find the installation file. The following step concerns the execution of the “Windows_ 10_IoT_Core_Rpi2” installation file, that will install the tools and will put the veritable image in “C:Program Files (x86)Microsoft IoTFFURaspberryPi2”.

The file we are interested in is named “flash.ffu” and represents the operating system image.

The FFU format has been specifically created by Microsoft for the deployment of Windows.

In order to create the SD card needed to boot the Raspberry Pi, it is needed to execute “WindowsIoTImageHelper”, that will present an interface with which to specify the SD card on which to write, and the FFU file path. Once the two options have been indicated, it will be enough to select the “Flash” button and wait for the procedure to end.