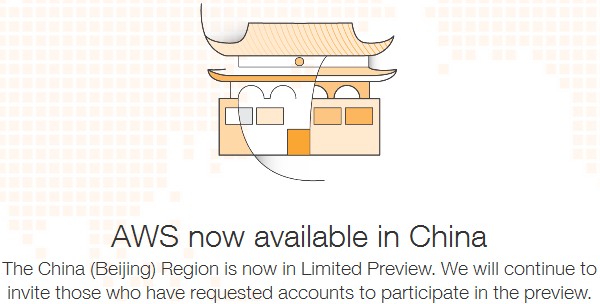 Amazon Web Service (AWS) is a bunch of server, storage, and other internet resources. AWS datacenters are located around the world so companies can locate websites close to their customers and speed up page load times.

A couple years ago AWS started testing a center in Beijing, China. There’s all sorts of benchmarks on speed within and between AWS datacenters, but the Beijing location is restricted to registered Chinese companies so there’s very little public (English) info on it.

In March the internet in Shenzhen because nearly unusable. While access within China reaches 100Mbps, anything outside China experienced 50%+ packet drops and max speeds of a 20-50Kbps. In a desperate ploy we tried to setup a VPN within China to a better exit point – maybe AWS has a better connection to the outside world than our local ISPs. Keep in mind that this a VPN inside China, the internet is still filtered but is hopefully more consistent and usable.

Signing up for the AWS beta was pretty easy. The account reps were super helpful and spoke perfect English. Everything went smoothly aside from the rep’s utter disbelief that, yes, we are a real Chinese company not a Hong Kong Company, and yes, we don’t want a free trial tier, and yes, we can pay in RMB from a Chinese company bank account. We guess they get a lot of people trying to sign up for free service without a company because they mentioned these things a dozen times.


We setup a “medium instance” with Ubuntu, AWS cult code for a small server without throttling. First things first – apt-get update && apt-get upgrade – to bring the server up to date. Apt pulled from AWS repositories within the same datacenter in China at a shocking 64Kbps! They didn’t even break 100Kbps within their own datacenter! Holy crap. For comparison, we regularly FTP between our servers in Hetzner’s German datacenter at 100Mbps+. Pathetic.

Ok, what about the connection to the outside world? The vast majority of our web traffic exits China from Beijing on one of two cables: San Jose, USA and Tokyo, Japan. Surely we could take advantage of our good speeds within China and then slingshot international traffic at higher speeds through the “superior” AWS infrastructure. Not exactly. A file download from DirtyPCBs.com, located in a super high speed San Jose datacenter, topped out at 16Kbps. Really Amazon?

We did similar experiments with Aliyun, the Chinese version of AWS made by the Alibaba/Aliexpress people. The results were slightly better but still absolutely unusable as a gateway to the internet outside of China.

The quest for an internet solution continues…