Autodesk’s ChronoFab creates the illusion of motion to 3D printing

Autodesk’s ChronoFab is a tool designed specifically for capturing the look-and-feel of movement in an inanimate 3D object file by combining dynamic physics algorithms and whatever 3D model it is that you’re hoping to infuse the illusion of motion into. Inspired by 2D comic book art (where smoke clouds and motion trails have been adding life to comic panels for decades) ChronoFab provides an easy system to modify static 3D model files with code based motion modifications.

This novel approach of treating 3D modeling as a dynamic art-form provides powerful design tools to any creator more interested in impressive results over learning the complex math often associated with achieving phyics based patterns. An Autodesk promotional piece suggests that “the core idea can be generalized by the development of 3D sculpting tools that have any awareness of back-end animation data of how a model moves or deforms over time.” And if the freely available research paper is any indication, they certainly did their due diligence ahead of developing the product.


Using a term called dynamic sculpting, the Autodesk Research paper details how their software interprets desirable motion patterns around a static 3D model file. What this means is you can import your Superman 3D model character, draw a few direction specific lines and voila, your Superman now has the illusion of movement. 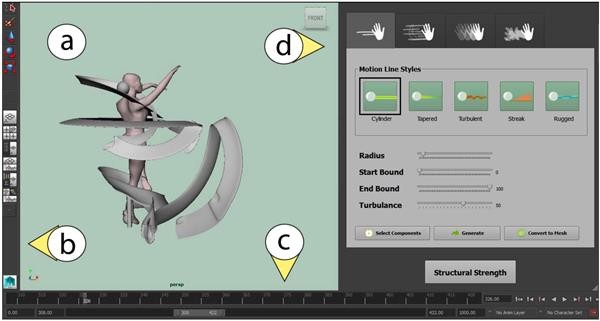 The software categorizes the possible motion patterns into separate toolsets. Multiple Stroboscop Stamps depict complex motion within a very short period of time. The sweep technique generates motion geometry by sampling numerous instances of a 2D curve (such as a long exposure photographic blur). Motion lines are created after sampling numerous trajectory based positions of a “moving” object over time. And then Particle systems, which are based on fluid effects to create the illusion of trails (smoke from a rocket for example).