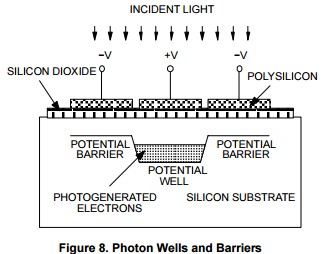 Like many technologies, the Charge-Coupled Device (CCD) started out as one kind of creature and wound up as something completely different. Invented in the late 1960’s by researchers at Bell Labs, it was initially conceived as a new type of computer memory circuit, and it was demonstrated in 1970 for that facility. It soon became apparent that the CCD had many other potential applications, including signal processing and imaging, the latter because of silicon’s light sensitivity that responds to wavelengths less than 1.1 m (the visible spectrum falls between 0.4 m and 0.7 m). The CCD’s early promise as a memory element has since disappeared, but its superb ability to detect light has turned the CCD into the premier image sensor technology.