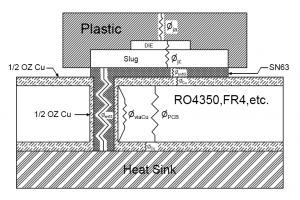 As the power dissipation and availability of surface mount RF power amplifiers has increased, the need for careful thermal management of the next higher level assembly has become increasingly important. Previous generation RF power amplifiers were generally available in flange mount style packaging that inherently provided a mechanical and thermal mount for these devices directly to a metallic housing. However, these devices could not be surface-mounted on a circuit board and, as a result, increased the product cost. Current generation RF power amplifiers are generally available in surface-mount QFN packages that can be attached to traditional PCB’s via mature reflow soldering processes.


With this package style, the PCB now has to function not only as the RF interconnection between devices, but also the path to conduct heat away from the power amplifier. The ability of the PCB to conduct heat depends directly on the materials, layout and design of the PCB. This application note will detail the methods needed to analyze the PCB design to ensure it will serve as an adequate thermal interface between the RF power amplifier and the heat sink.