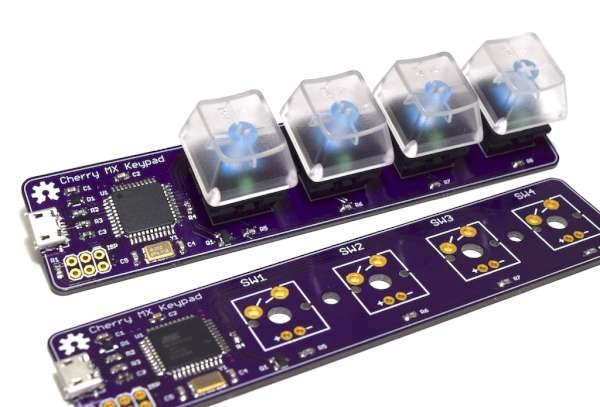 The board that I designed includes four Cherry MX keys. I used MX Blues, but it is also compatible with other types such as Brown and Red. It’s simply a matter of soldering on the ones you want. The keys are backlit by 3mm LEDs that sit in recesses in the sides of the keys. They are controlled via PWM to allow changing the brightness. The microcontroller running the show is an Atmel ATmega32U4. This is the same microcontroller used on the Arduino Leonardo. In fact, this board looks like a Leonardo to the Arduino IDE for programming. There is an ISP port for burning the bootloader with a programmer (Atmel ICE, USBtinyISP, etc), but you only need to do that once. Afterwards simply connect the board to your computer using the Micro USB connector for programming and normal usage.

More details at The Sync Channel blog. Project files are available on Github.