Intel Genuino 101 Review: can it replace the Pi? 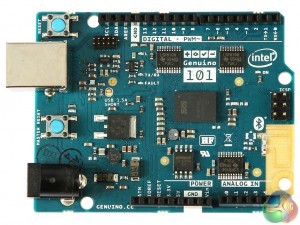 The easiest way to describe the Genuino 101 is that “it’s a bit like the Raspberry Pi“. Except that it isn’t. Where the Pi is a tiny, cheap, programmable computer able to run a full operating system, the Arduino is more like a programmable co-processor, for creating low power devices that react to their environment.

Arduino isn’t the same kind of beast as the Raspberry Pi, and the Genuino 101 particularly so. The Arduino is for testing, prototyping and learning with the potential aim of developing ideas for the next generation of “ubiquitous computing” devices, such as wearable computing or the Internet of Things.

The Genuino 101 takes this another step forward. Most functions can be added to an Arduino with the judicious use of a Shield or some electronic components. But a couple of the most interesting and useful options come as standard with the Genuino 101. There’s a Bosch BMI160 six-axis accelerometer and gyroscope, plus a Nordic nRF518 Bluetooth chipset, feeding into the 32-bit DSP sensor hub that forms part of the Intel Curie system.


Intel has also recently made the firmware for the Genuino 101 available and open source, so the Arduino IDE won’t be the only way to access the rich array of features and functionality.