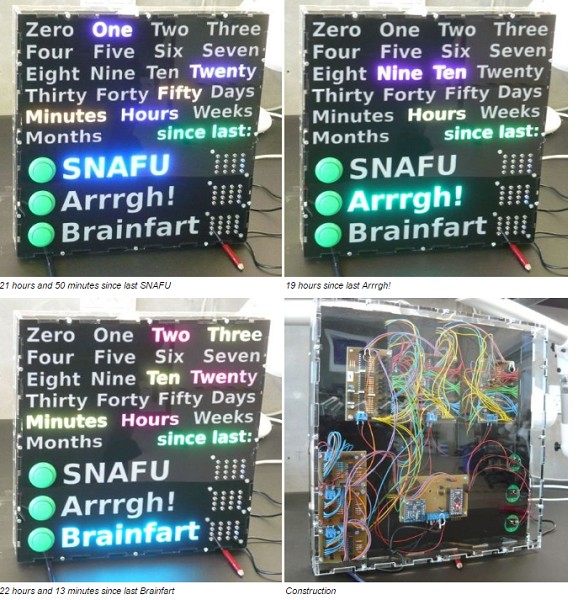 A SNAFU box project by Bertho of Vagrearg:

SNAFU Box consists of 24 LED strips (12V passive type) of varying size, which are controlled by a set of 74HC595 shift-registers and a transistor driver for each strip and RGB channel. The LED strips are used to backlight the lettering of the box. An additional three 74HC595 shift-registers are used for 4×4 matrices of blue LEDs, which are used to count the number of times a particular expression has been activated. Everything is controlled by an Arduino Pro Mini (5V) and an RTC (DS1307) keeps time and stores the current state (so it can be restored on power-failure).
The schematics are straight forward. The 4×4 matrix is divided into two PCBs. One for the electronics and one for the LEDs. The LED driver board and the 4×4 matrix boards use three identical copies for the entire design. The control board is created with KiCad, while the other PCBs are created with gEDA. The control board was created later, rather ad hoc, to replace a perfboard.