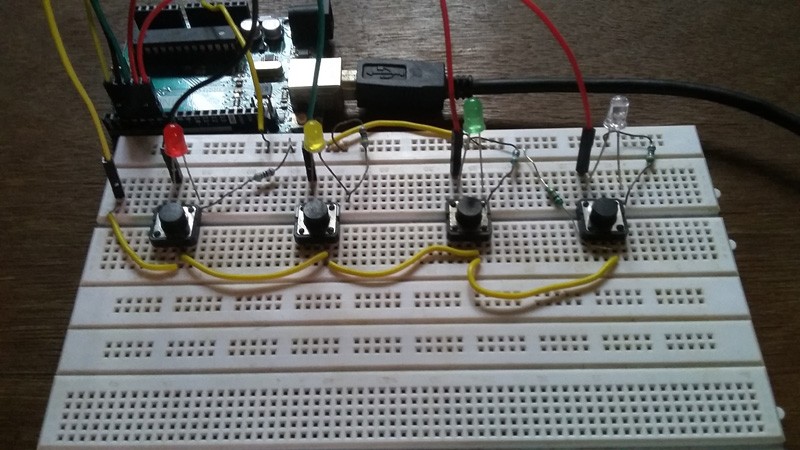 Arduino based games and consoles are quite popular around the web. And this article is going to bring out the Design, working and code part of a simple Reflex test / trainer using Arduino Uno. Reflex tests are usually carried out to determine how quick our brain reacts to some external stimuli. Good Reflexes are very important for athletes, Sports personal and Gamers. Reflex test equipements or Reflex trainers usually consists of switches which needs to be activated within the time limit when the indicator goes on.

The above image shows the one i built using 4 push buttons and LED’s. This was a kind of mini version of Reflex test with limitations. However you can build complex huge one of your wish with replacing the buttons with big switches, increasing the distance between LED’s and altering the LED positions or patterns.

In the above Reflex gamer i have used simple push buttons as activator and LED’s as indicators. Each buttons are added near the each LED’s indicating the association between them. So when a LED lights up corresponding button should be pressed within the given time to score a point. The person who gets the most point wins the game, that’s how this game and design works.


The design of this Reflex test/ trainer is pretty simple and easy to implement. The switches S1,S2…S4 acts as an activator for the LED’s D1,D2…D4. The switch and associated LED’s are connected in parallel manner. The other end of all the switches are tied together and connected to the pin 2 of Arduino where we are going to use the external interrupt of Arduino. Resistor R1,R2 … R4 serves as a current limiting resistor for LED meanwhile R5 acts as a pull down resistor for the interrupt pin 2 of Arduino.

This sequence comprises turning the LED’s ON and OFF with specific time delay connected to the pins 3,4,5 & 6 pins of the Arduino. This time delay decides the difficulty level of your reflex test. When the LED’s are powered ON the high signal passes through the button since it was parallelly connected. Nothing happens interesting when button is in open state, but when it is closed it forms an electrical path to the pin 2 of Arduino. This triggers the interrupt in the Pin 2 and then the interrupt was processed as point in the code.

The interrupt will only be triggered if you are quick enough to press the button following the lighting sequence of the LED’s. Late button press or failing to hit the appropriate sequence will not result in interrupt. Therefore in turn there will be no points scored.

Every time you hit the right switch at the right time you will be awarded a point. Since i want to finish it by means of simple hardware i wrote the code to display the point in the serial terminal of Arduino IDE at the end of total sequence. This helps me to cut down the requirement of extra hardware for this project.

In case if you don’t wanna use your PC for viewing the points hook up a Bluetooth module to your Arduino. This enables your smart phone to communicate with your Arduino and get the points after test sequence is completed. You also can use a LCD with Arduino for points visibility, the choice is up to yours.

The post Reflex test for your brain using Arduino appeared first on Gadgetronicx.