The Potentiometer And Wiring Guide 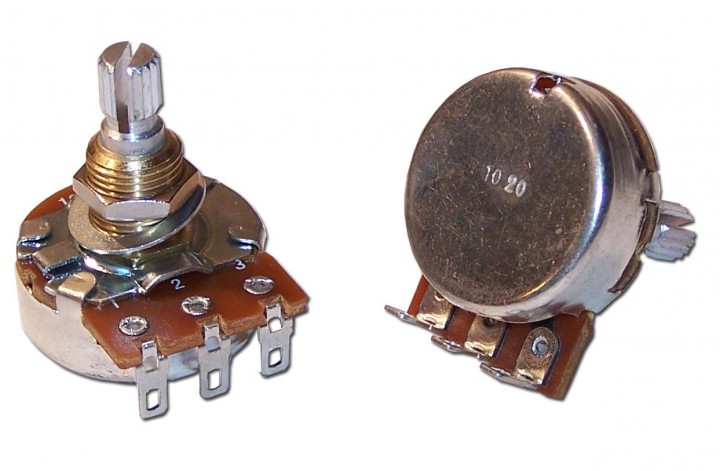 The potentiometer is a handy little component that you really should know how to use.

It’s used in circuits a lot, such as to control the volume of music equipment, control the brightness of a light, and much more.

If you’re not familiar with it, it can seem complicated to use in a circuit. But once you see how it’s built, you’ll quickly understand how it’s done. Check out the wiring examples at the end to see it in action.

What Is A Potentiometer?

It has three pins and the schematic symbol looks like this: Between the two side pins of the potentiometer there is a strip of resistive material. For example as carbon. This material creates resistance.

We call the middle pin the wiper. It is connected somewhere on the strip between the two ends.

You can move the point where the wiper connects to the carbon strip by turning the shaft of the potentiometer. Move the wiper to the right, and the opposite happens.

When you buy a potentiometer, you have to choose a value. For example 100k. This value is the resistance between the two end pins. And it’s the largest resistance value you can get from it.

Wiring a pot can be confusing at times. I’m often asked:

“What does the third potentiometer pin do?”

Well, the pins doesn’t really “do” anything actively.

As explained above, the two pins on the side connect to the ends of a carbon strip. The middle one connects somewhere between the ends of this strip.

Keep that in mind, and have a look at the following three examples on how to wire a potentiometer.

If you need a simple resistor that you can change the resistance of, you only need two pins: the middle pin and one of the side pins. The above image shows a simple circuit to dim an LED. The extra resistor is there to make sure you don’t destroy the LED even if you change the potentiometer resistance to zero.

Sometimes you’ll see a potentiometer in a circuit diagram, connected like this: The middle and bottom pin are connected. Why?

And how does that affect the resistance?

This way of connecting is actually equal to connecting only two pins. Connecting the third pin to the middle pin does not affect the resistance at all.

Some people prefer it this way. Some may argue it’s a bit messy with an unconnected pin, so they connect it like this. You’ll also avoid warnings in some circuit design softwares.

This example uses all three pins of the potentiometer to create a simple way of adjusting the volume of an amplifier. By connecting it like this, you’ll get a voltage divider that decreases the voltage of the input signal. The more you turn the shaft, the more you decrease the volume.

This potentiometer wiring is very common in audio equipment.