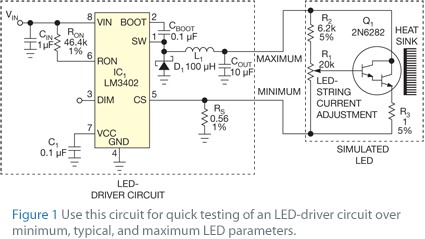 Jon Roman and Donald Schelle have a design idea on how to simulate a high power led to test your driver circuit.


Testing the driver circuit using LEDs, although easy, yields only typical results because the tests don’t factor in worst-case LED parameters and often generate undesirable light and heat during driver debugging. Although using a constant resistance might seem to be an appropriate approach, a resistor approximates an LED load at only one point on the current/voltage curve. An electronic load may prove to be a more useful approach. The control loops of the driver circuit and the electronic load, however, often result in system instability and oscillations.