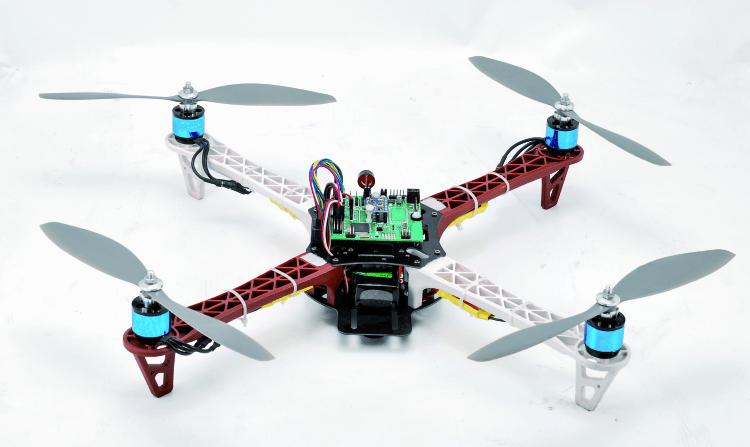 Let’s complete the construction of our aircraft and test it.

Now that you have physically created the quadcopter – according to the indications supplied in the first installment of this article (published here) – you may move on to the operational stages, and see as a first thing the commands available for our radio model and the customized settings in the remote control.

Commands via radio and calibrations

You have different commands available, that may be directly sent from the radio without the need to use the telemetry. Once the quadcopter has been powered, the propellers remain still and the motors are not powered; they are therefore “unarmed”. In order to give the commands and to carry out the calibrations you have to “arm” the quadcopter; that means to bring the propellers to the minimum rotation speed, while waiting for the climb command. We will see the commands that is possible to give as follows.

The quadcopter supports different flight modes, depending on which sensors are used in the stabilization. We will describe them as follows.


In Table  you will find a summary of the various flight modes and the sensors needed in order to implement them. By means of the radio auxiliary channels it is possible to select the desired flight mode; this is done by means of a firmware routine that associates a specific mode to a given range of values of the PWM signal. In the CT6 radio transmitter, that we used in order to command the quadcopter, the auxiliary channels are managed via a potentiometer each, which makes it very inconvenient to set the operating modes by means of them; for this reason in the first installment we told you to substitute a potentiometer (it is better to substitute both) with a 3-position deviator of the ON-OFF-ON kind, that guarantees the safe correspondance between the lever’s position and the desired mode.

Once the modification is carried out, the selection of the operating modes is as follows:

The definition of these functions is carried out by using MultiWiiConf and by clicking on the small squares corresponding to the function you want to activate.