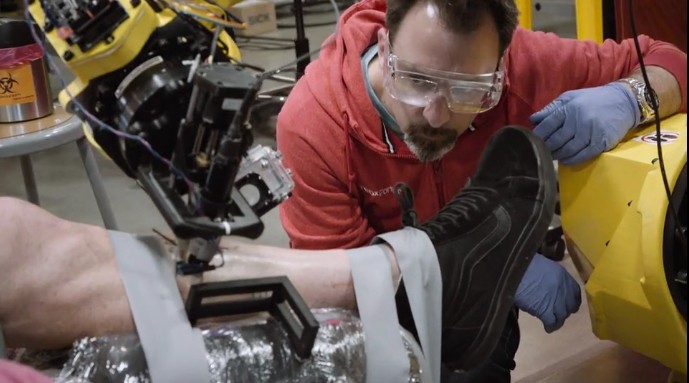 Last year, we reported on a French tattoo studio that hacked a MakerBot printer and turned it into a tattooing machine. At the time, it was still a pretty rough, if cool, concept – tatoué, as Appropriate Audiences named their invention, was able to tattoo a few basic shapes onto a person who inserted his or her arm carefully into the printer, but there wasn’t much versatility in terms of what kind of designs or parts of the body could be tattooed.

With help from Autodesk’s Applied Research Lab, tatoué has gone from a modified 3D printer to a giant robot arm that can tattoo anywhere a human tattoo artist can. A 3D scan was taken of the subject’s leg (Appropriate Audience’s Pierre Emm volunteered to be the guinea pig) and imported into Dynamo, Autodesk’s graphical parametric design software. The tattoo design, a simple spiral, was applied to the model, and the information was exported to the robot as code so that it would know exactly what and where to tattoo.

It worked perfectly (much to Emm’s relief, I’m sure). According to Thomasson, they’re hoping to now work on open-sourcing the technology with help from other research institutions and universities.