Counterfeit Macbook charger teardown: convincing outside but dangerous inside

What’s inside a counterfeit Macbook charger?
After my Macbook charger teardown,
a reader sent me a charger he suspected was counterfeit.
From the outside, this charger is almost a perfect match for an Apple charger, but disassembling the charger shows that it is very different on the inside.
It has a much simpler design that lacks quality features of the genuine charger, and has major safety defects.

Inside a counterfeit MagSafe 45W charger.

The counterfeit Apple chargers I’ve seen in the past have usually had external flaws that give them away, but this charger could have fooled me.
The exterior text on this charger was correct, no “Designed by Abble” or “Designed by California”. It had a metal ground pin, which fakes often exclude.
It had the embossed Apple logo on the case.
The charger isn’t suspiciously lightweight.
Since I’ve written about these
errors in fake chargers before, I half wonder if the builders learned from my previous articles.
One minor flaw is the serial number sticker (to the right of the ground pin) was a bit crooked and not stuck on well. 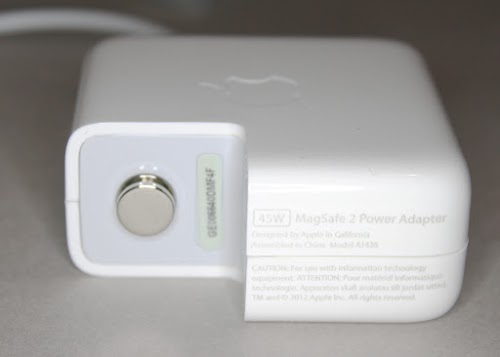 This counterfeit MagSafe 45W charger has the same ‘Designed by Apple in California’ text as the genuine charger. Unlike many fakes, it has a metal ground pin (although it isn’t connected internally). To the right of the ground pin, the serial number label is a bit crooked, which is a hint that something isn’t right.

The photo below shows the safety certifications that the charger claims to have.
Again, it looks genuine, with no typos or ugly fonts.

One flaw that made the original purchaser suspicious was the quality of the case didn’t seem up to Apple standards. It didn’t feel quite like his old charger when tapped, and the joints appear slightly asymmetrical, as you can see in the picture below. 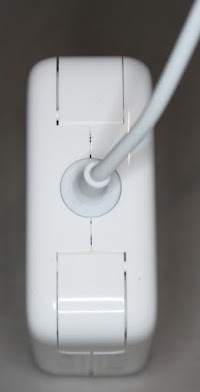 The seams in a counterfeit Magsafe power supply are a bit asymmetrical.

A problem showed up when I plugged in the charger and measured the output at the Magsafe connector.
I measured 14.75 volts output and got a spark when I shorted the pins.
Since the charger is rated at 14.85 volts, this may seem normal, but the behavior of a real charger is different.
A Magsafe charger initially produces a low-current output of 3 to 6 volts, so shorting the output should not produce a spark.
Only when a microcontroller inside the charger detects that the charger is connected to a laptop does the charger switch to the full output power.
(Details are in my Magsafe connector teardown article.)
This is a safety feature of the real charger that reduces the risk from a short circuit across the pins.
The counterfeit charger, on the other hand, omits the microcontroller circuit and simply outputs the full voltage at all times.
This raises the risk of burning out your laptop if you plug the connector in crooked or metallic debris sticks to the magnet.

Cracking the charger open with a chisel reveals the internal circuitry. A real Apple charger is packed full of complex circuitry, while this charger had a fairly low density board that implemented a simple flyback switching power supply. 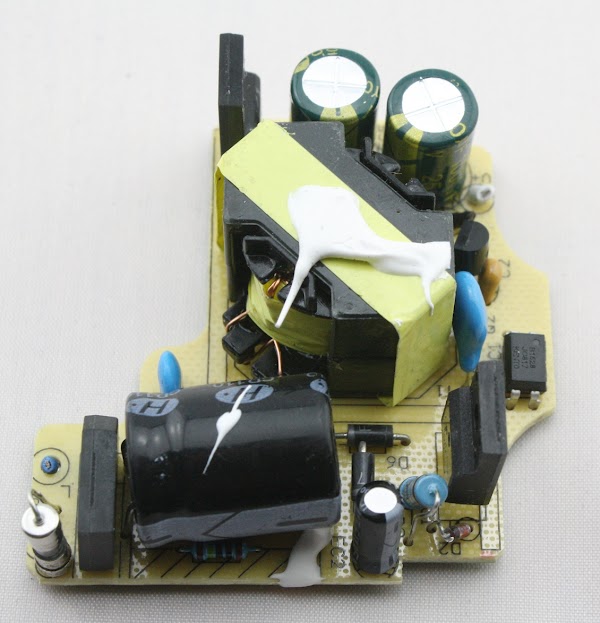 A view of the counterfeit MagSafe charger with the case and heat sink removed.

The circuit is a fairly standard flyback power supply.
To understand how it works, look at the diagram below, going counterclockwise from the AC input on the right.
After going through a fuse, the power is converted to DC by a bridge rectifier. The large filter capacitor smooths out the DC.
Next, the switching transistor chops the DC into pulses, which are fed into the flyback transformer. The transformer’s low-voltage output is converted back to DC by the output diode.
The output filter capacitors smooth the DC output. 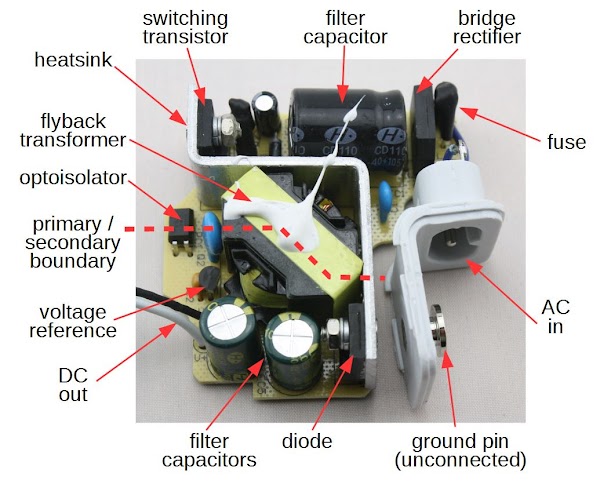 The counterfeit Magsafe power supply uses a standard flyback switching power supply circuit. AC enters at the right and is converted to DC. The switching transistor sends pulses into the flyback transformer (center), which produces the low voltage output (left).

A TL431A voltage reference generates a feedback signal from the output, which is fed to the control IC through the optoisolator.
While this circuit may seem complex, it’s pretty standard for a simple charger.
A genuine Macbook charger on the other hand has a much more complex circuit, as I describe in my teardown.

The charger is controlled by a tiny 6-pin IC on the underside of the board. It
switches the MOSFET on and off at the proper rate (about 60 kilohertz) to generate the desired output voltage. The control IC is labeled “63G01 415”, but I couldn’t find any chip that matches that description. (Update: a clever reader identified the chip as the OB2263.) 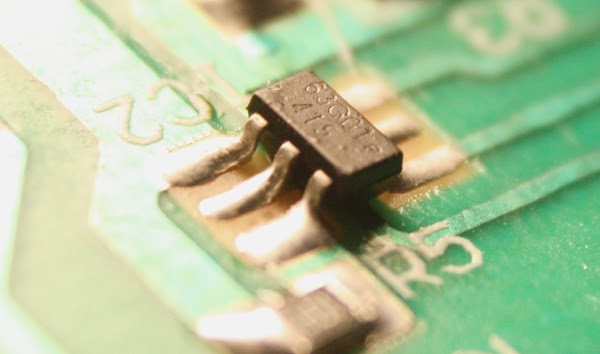 Closeup of the tiny control IC inside a counterfeit MagSafe 45W power supply.

What’s wrong with this charger

The most important feature of a charger is the isolation between the potentially-dangerous AC input and the low-voltage output. High voltage and low voltage should be separated by a safety gap of at least 4mm (to simplify the UL’s creepage and clearance rules). On the circuit board below, the high voltage input section is at the bottom and the low voltage output section is at the top. On the right half of the board, the two sections are separated by a large gap, which is good.
On the left, there should be a gap (bridged by the optoisolator). Unfortunately, traces and components pass through this area making the gap dangerously small, under 1 mm. Any moisture or loose solder could bridge this gap sending high voltage to the output. 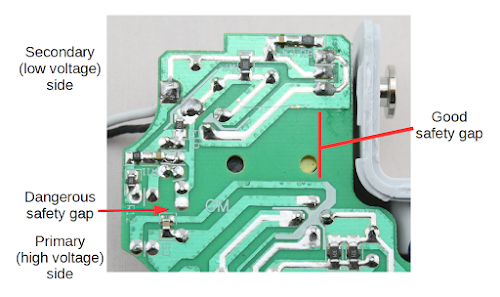 I’m puzzled as to why counterfeit chargers never manage to have sufficient
clearance distances. They use simple, low-complexity circuits so the circuit board layout should be straightforward. Except in the smallest cube phone chargers, they aren’t fighting for every millimeter of space. It shouldn’t take much additional effort to make the boards safer.

The second safety flaw is the heat sink that provides cooling for the input-side MOSFET and the output-side diode. The heat sink is basically a giant conductor between the two sides of the circuit, with only small gaps separating it from active parts of the circuit.

As well as having large creepage and clearance distances between high and low voltages, genuine chargers also make extensive use of insulating tape for separation. The counterfeit charger lacks extra insulation, except heat-shrink tubing around the fuse and fusible resistor. I didn’t disassemble the transformer, but I expect it also lacks the necessary insulation.

The counterfeit charger has a metal ground pin (unlike other fakes I’ve seen that have a plastic pin). However, the pin is just for appearance and is not connected to anything.

The photo below compares the underside of the counterfeit 45W charger (left) with a genuine Apple 60W charger (right). As you can see, the counterfeit has a simple circuit board with just a few parts, while the genuine charger is crammed full of parts.
The two boards are in totally different worlds of design complexity.
The additional parts provide better power quality and improved safety in the real charger; this is part of the reason genuine chargers are significantly more expensive.

Comparison of a counterfeit MagSafe 45W charger (left) and a genuine 60W charger (right). The genuine charger is crammed full of components, while the counterfeit just has a few components.

Quality of the power

I measured the output power from the counterfeit charger with an oscilloscope, while drawing 15 watts.
As you can see below, the output power is not smooth, but has pairs of large spikes when the switching transistor turns on and off.
The charger operates at a frequency of about 60 kilohertz.
More filtering inside the charger reduces these voltage spikes, but would cost more. 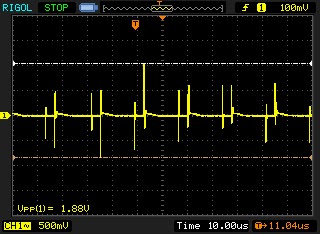 The switching power supply operates at about 60 kilohertz, producing large voltage spikes in the output. You can see a spike when the transistor switches on, followed by another spike when it switches off.

The oscilloscope trace below zooms in on one of the spikes. You can see that the spike measures 2.7 volts peak-to-peak, which is a lot of noise to be feeding into your laptop. 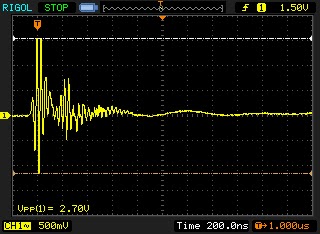 The output of the counterfeit charger has large 2.7V noise spikes when a transistor switches internally.

This counterfeit Magsafe charger is convincing from the outside, with more attention to detail than most. Until I opened it up, I wasn’t completely sure that it was counterfeit. But on the inside, the difference between the counterfeit and real chargers is clear. The counterfeit has a much simpler circuit that provides poorer-quality power. It also ignores safety requirements with less than a millimeter separating you and your computer from a dangerous shock. While counterfeit chargers are much cheaper, they are also dangerous to you and your computer. Thanks to Richard S. for providing the charger.

For those who care about the component details, the
MOSFET is a 600V, 7.5A transistor from Fairchild (FQPF8N60C datasheet).
The optoisolator is a Kento JC817 (datasheet).
The output diode is a
NAMC MBRF10100CT 10A 100V Schottky barrier rectifier.
I was unable to identify the control IC, which is marked with “63GO1 415”.
The Y capacitor (blue) is JNC JN472M 250V 4.7nF capacitor.