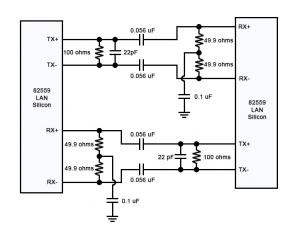 This document, and its associated circuitry, was conceived and developed in response to many requests by our OEM customers involved in embedded designs to reduce component expense and “real estate” use on their boards. These new designs eliminate the need for the relatively large and expensive magnetics module commonly used between PHYs and the RJ45 connectors as well as in backplane and other such direct connect applications. We have developed a simple solution that can be used in a wide variety of such applications with the intent of simplifying the design cycle and reducing development time enabling products to enter the market in a shorter time frame than otherwise might be possible.


Since different LAN devices use different DC-biasing and different current source circuits, there is no single, magnetic-less circuit that will allow the LAN to work properly with every different, possible pair of LAN components. Magnetic-less LAN designs with good networking performance and extremely good Bit Error Rates (BERs), will not necessarily be fully IEEE compliant. Typically, they should comply with many, but not necessarily all, of the IEEE specifications.

Although the primary development and testing was done using the Intel® 82559 Fast Ethernet Controller with integrated MAC and PHY, the circuit and basic guidelines can be used with the 82550xx and the new 82551QM and 82551ER devices which are based on the 82550, which in turn was based on the 82559. All testing was performed on modified Intel network interface cards (NICs) using the 82559 controller.