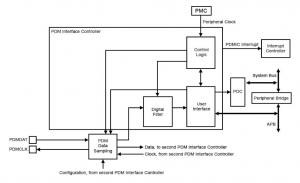 The Pulse Density Modulation Interface Controller (PDMIC) from SAM G53 is a PDM interface controller and decoder that support both mono/stereo PDM format. It integrates a clock generator driving the PDM microphones and embeds filters which decimate the incoming bit stream to obtain most common audio rates.


Pulse-density modulation, or PDM, is a form of modulation used to represent an analog signal with digital data. The audio signal coming from MEMS microphone is in the form of PDM signal. PDM uses only one bit to convey audio.

The PDM clock (PDMCLK) is used to sample the PDM bit stream. The SAM G53 device provides the Master clock to Microphone to transmit the PDM data.