A room light controller with its own light display 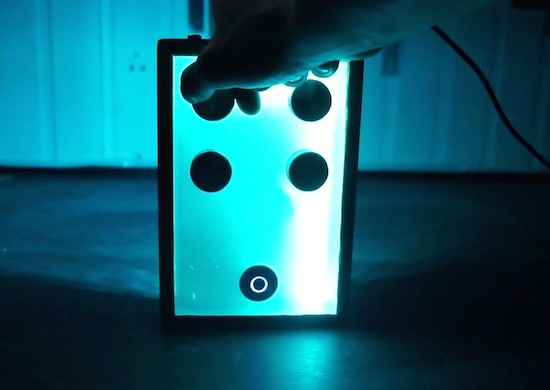 Hansi (aka “Natural Nerd”) wasn’t content simply controlling his room’s lighting, so he had his control box illuminate along with it!

In order to control lighting intensity, you could hook up a potentiometer directly, but Hansi decided to instead connect four potentiometers to an Arduino Nano to control an external light source. These four inputs are attached to analog pins on the Arduino, which control a strip of RGB LEDs inside of a partially translucent box. When the knobs are turned, the number of LEDs on display increase or decrease, in different colors depending on which it turned. An external light can then be controlled along with the beautiful controller display.

This Instructable will show you how I made a control panel that has three 12 volt power output ports which can be controlled with knobs at the front. I will be connecting the lighting in my basement to the three outputs, so that it can be controlled through the panel.

The panel has a nice and ambient light pulsation when it’s passive, and when you turn the knobs, the internal light indicates how much the knob is turned, with a separate color for each knob.

Intrigued? You can check out the project’s page on Instructables, and find the Arduino code here.