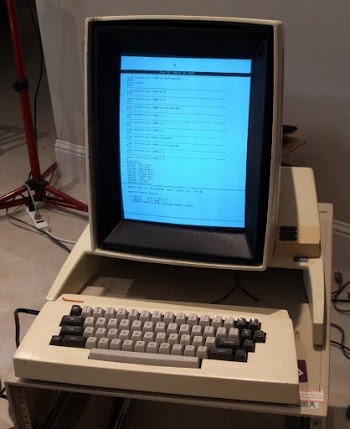 Last week, after months of restoration, we finally got the vintage Xerox Alto computer to boot (details) and run programs. However, some programs (such as the mouse-based Draw program) crashed so we knew there must still be a hardware problem somewhere in the system. In today’s session we traced through the software, microcode and hardware to track down the cause of these crashes.

For background, the Alto was a revolutionary computer designed at Xerox PARC in 1973
to investigate personal computing. It introduced the GUI, Ethernet and laser printers to the world, among other things.
Y Combinator received an Alto from computer visionary Alan Kay and
I’m helping restore the system, along with
Marc Verdiell, Luca Severini, Ron Crane, Carl Claunch and Ed Thelen.
The full collection of Alto restoration posts is here.

When the Xerox Alto encounters a problem, it drops into the Swat debugger.

To assist with debugging, the Alto includes a debugger called Swat.
If a program malfunctions, it drops into the Swat debugger, as seen above.
The debugger lets you examine memory and set breakpoints. It is more advanced than I’d expect for 1973, including a feature to disassemble machine instructions from memory and view them with names from the symbol table.

In our case, the debugger showed that when we ran the MADTEST test program, the Alto had jumped to address 2, which triggered the debugger.
The first 8 memory locations in the Xerox Alto contain TRAP instructions to catch erroneous jumps to a zero address (or near-zero address) which can happen if a subroutine return address is clobbered.
By examining the stack frames, I determined which subroutine had been called when the system crashed. The problem occurred when the program was jumping to microcode that had been loaded into microcode RAM,
Since this is an unusual operation, it would explain why most programs ran successfully and only a few crashed.

The Xerox Alto uses microcode much more extensively than most computers, with microcode performing tasks such as device control that most computers do in hardware, resulting in a cheaper and more flexible system.
(As Alan Kay wrote, “Hardware is just software crystallized early.”)
On the Alto, programmers have access to the microcode—a user program can load new microcode into special control RAM. This microcode can implement new machine instructions, optimize particular operations (analogous to GPU programming), or obtain low-level control over the system. 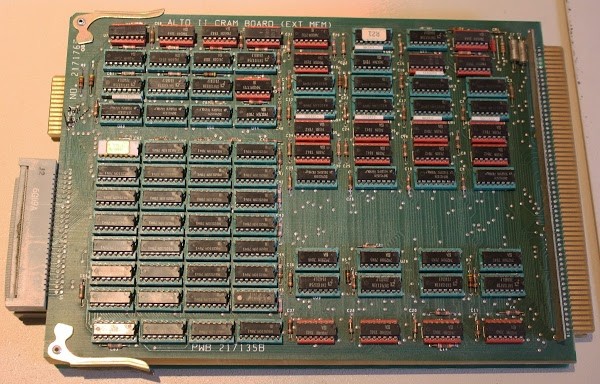 Our Alto has 1024 words of microcode in ROM (for the standard microcode) and 1024 words in RAM (for software-controlled microcode). The photo above shows the CRAM (control RAM) board that holds the user-modifiable microcode.
This board illustrates the incredible improvements in memory density since 1973—this board required 32 memory chips to hold the 1024 32-bit words (4 Kbytes) of microcode.

The Alto’s microcode uses a 1K (10-bit) address space. Since Altos can support up to 2K of microcode in ROM and 3K in RAM, bank switching is used to switch between different 1K memory banks. Bank switching is triggered by a special micro-instruction called SWMODE (switch mode). 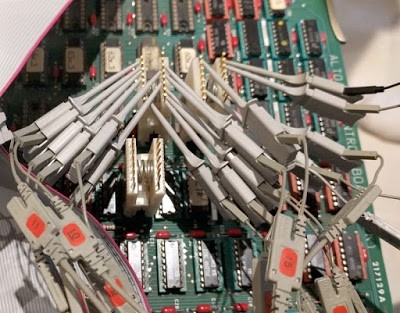 To track down a problem with the Xerox Alto’s bank switching circuit, we attached many probes to the CPU control board.

We used a logic analyzer to record every micro-instruction and memory access, so we could determine exactly what went wrong. After a few tries, we captured a trace showing what the Alto was executing until it crashed.
Over the past week, I’ve been using the Living Computer Museum’s ContrAlto simulator of the Xerox Alto to understand how the Alto’s software and microcode work.
With this background, I could interpret the logic analyzer output and map it to the MADTEST code and the microcode.
Everything proceeded fine until the JMPRAM instruction was executed.
Instead of switching to the microcode in RAM, it was still running microcode from the ROM.
Since the micro-address was intended for the RAM code, the processor was running essentially random microcode.
Through pure luck, this microcode routine completed and returned control to the regular machine code emulator rather than hanging the system. Unfortunately this code didn’t load the return address register, resulting in a jump to address 2 and the Swat crash we saw.

To summarize, everything was working fine except instead of switching to the microcode RAM bank, execution stayed in the microcode ROM bank. This was pretty clearly a hardware problem, so we started looking at the bank switch circuit, which consists of multiple integrated circuits.

The Alto was built at the dawn of the microprocessor age, so instead of using a microprocessor chip, it used three boards of TTL chips for the CPU.
The control board interprets the microcode, including performing bank switching, so that’s where we started our investigation.

Bank switching in the Alto happens when the SWMODE micro-instruction is executed. The destination bank is selected following complex rules that depend on the hardware configuration and the current bank.
Rather than implement these rules with a complex hardware circuit, the Alto designers used the short cut of encoding all the logic into a 256×4 PROM chip. (This also has the advantage that a different hardware configuration can be supported simply by replacing the PROM.)
The schematic below shows the PROM (left) generating the bank select signals (yellow), which pass through various chips to create the current bank select signals (right), which are fed back into the PROM for the next cycle.

We connected logic analyzer probes so we could trace each chip in the bank select circuit.
The PROM correctly generated the RAM bank signals when the SWMODE micro-instruction executed, but in the next step its inputs had reverted to the ROM bank for some reason. This showed the PROM worked, so we continued probing through the circuit.
Each chip had the proper output until we got to the multiplexer chip that feeds back to the PROM.
(This chip, on the right, handles microcode task switching by selecting either the current task’s bank, or the new tasks’s bank, which is recorded in a RAM chip.)
The input signal to the multiplexer pulsed high for the new bank, but the output stayed low, blocking the bank switch signal.
The oscilloscope trace below shows the problem: the input signal (bottom trace) is not passed to the output (middle trace).

A multiplexer IC in the Xerox Alto was failing to pass the bank switch signal from its input (bottom trace) to its output (middle trace).

We found a bad chip on the disk interface board a few weeks ago, so had we located a second bad chip?
We pulled out the suspicious chip (a 74S157 multiplexer) and tested it in a breadboard to prove that it was faulty. Surprisingly, it worked just fine. Perhaps the problem only showed up at high frequency? We swapped it with an identical chip on the board and the crash still happened. Clearly there was nothing wrong with the chip. But its output stayed low when it should go high. Why was this? 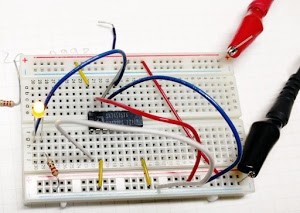 We thought this 74S157 multiplexer IC from the Xerox Alto was faulty. However, the chip worked fine when tested in a breadboard. 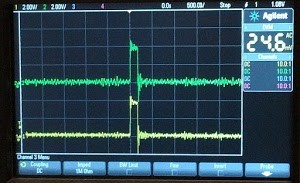 With the multiplexer’s output disconnected from the circuit, the input signal (bottom) appears on the output (top) as expected.

We removed the control board from the Alto to examine it for short circuits. On the back of the circuit board, we noticed that two white wires were connected to the multiplexer chip that was causing us problems.
(Wires are added to printed circuit boards to fix manufacturing problems, support new features,
or support new hardware.)
These wires went to the connector that was cabled to the CRAM (control RAM) board shown earlier. With the CRAM board
disconnected, the short to ground went away.
Thus, the cause of our crashes was these two wires that someone had added to the board!
Could we simply cut these wires and have the system work correctly?
We figured we should understand why the wires were there, rather than randomly ripping them out.
Maybe our control board and CRAM board were incompatible?
Maybe these wires were to support the Trident disk drive we aren’t using?
It was the end of the day by this point, so further investigation will wait until next time. 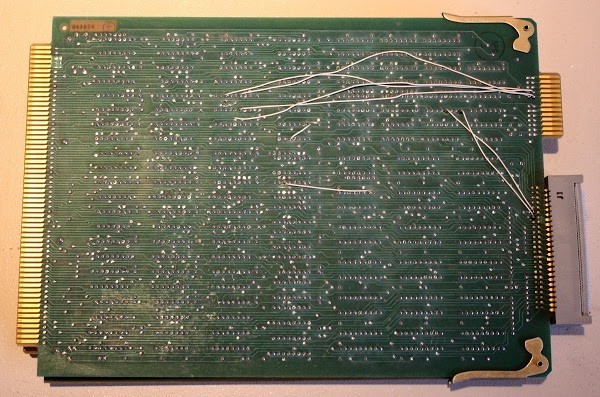 This is the Xerox Alto control board, one of three boards that make up the CPU. The board has been modified with several white wires which trigger our crashes.

After a bunch of software, microcode and hardware debugging we found that the crashes are due to
some wires added to one of the circuit boards.
These wires messed up microcode bank switching, causing programs that used custom microcode to crash.
Fixing this should be straightforward, but we want to understand the motivation behind these wires.
On the whole, the processor is working reliably other than this one issue.
Once it is fixed, we can run MADTEST (the microcode test program) to stress-test the processor.
If there are no more processor issues, we’ll move on to getting the mouse working.

For updates on the restoration, follow me on Twitter at kenshirriff.
Thanks to the Living Computer Museum for the extender board and the ContrAlto simulator.