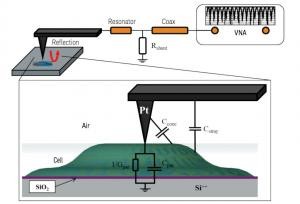 
The Scanning Microwave Microscope (SMM) merges the nanoscale imaging capabilities of an atomic force microscope (AFM) with the high-frequency broadband (from MHz to GHz) impedance measurement accuracy of a vector network analyzer (VNA) (Figure 1). The typical frequency range of the combined SMM is between 1-20 GHz (Huber et al. 2010). It allows characterizing electric, dielectric, and magnetic properties of materials at microwave frequencies with nanometer lateral resolution. Using the microwave signal, impedance nanoscale imaging and doping profiling can be performed. Typically the SMM is operated in reflection mode, whereby the ratio of the reflected and incident electromagnetic waves, the so called S11 scattering parameter, is measured by the VNA at each pixel of the AFM tip-sample contact point.

As such a microwave image is generated pixel by pixel, simultaneously to the topographical image. Imaging speeds are fast resulting in a typical acquisition time of one minute per image. There are mainly two different imaging modes in SMM. The first is quantitative dopant profiling by means of differential capacitance (also called dC/dV), which is a widely used technique for semiconductor failure analysis and detecting leakages in solid state devices with nanometer resolution (Huber et al 2012). The dC/dV mode relies on a low frequency (kHz) modulation of the GHz S11 signal using the Dopant Profile Measurement Module (DPMM). It allows tuning the semiconductor depletion zone with low frequency and probing the doping concentration through the native oxide interface at GHz frequency. The second SMM mode which is mainly used in life science is complex impedance imaging and it is based directly on the scattering S11 signal at GHz frequency (Gramse et al 2014).