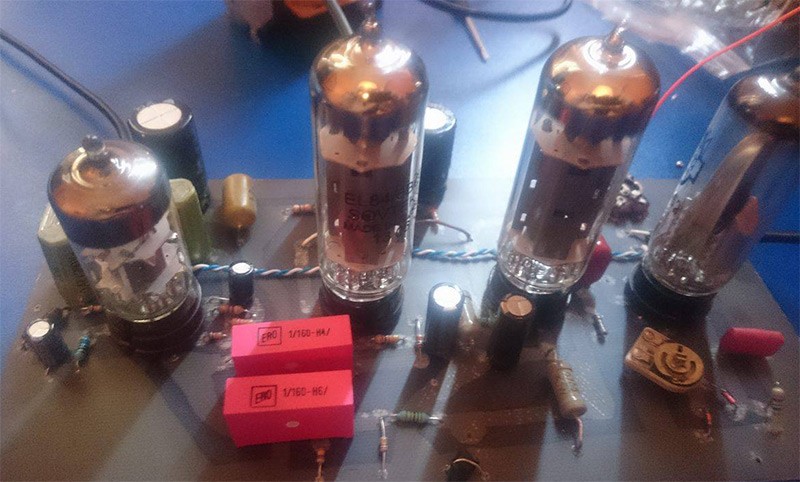 Here am yet again with a simple push pull amplifier circuit using Vacuum tubes. This design is very simple and brings good audio quality if properly built. There is a lot on every block of the circuit on the internet, so I`m gonna be going into little detail about this. Before looking the actual design of this amplifier let us have a quick look at its specs. 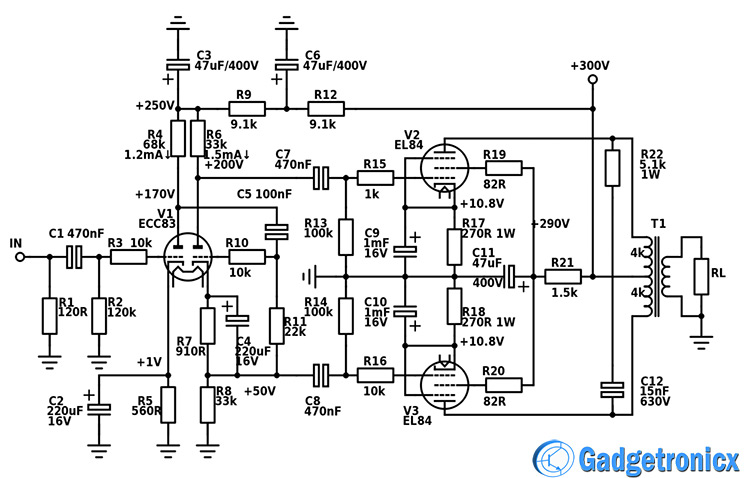 The first two stages use the most famous twin triode tube the ECC83/12AX7/6N2P. It has the highest gain of all triodes, which makes it suitable for the task. Alternatively I also designed a circuit with a pentode voltage amplifier stage, because currently the ECC83 is right on the edge of its gain capabilities and you can`t push it further without compromising distortion. But I chose to upload this design, because it uses very common tubes and has quite a sweet distortion tone.

The first stage is a very typical preamp voltage amplifier stage in a common cathode configuration. It possess a gain of around 55, bringing even the lowest line levels to sufficient voltage to drive the power amp.

The second stage is known as a cathodyne, and works as a phase inverter/driver. Since tubes don`t come in complementary pairs as transistors, you have to drive the power tubes in 180 dgs out of phase to get the push pull circuit. When one tube swings up, the other swings down with the same amount, and vice versa. The phase invertor uses the most common circuit (the Cathodyne), which when properly built can have a very good balance and can often be used in a Hi-Fi application.

The power stage is a class B push pull amplifier and as already stated, when one tube increases conduction the other decreases it by the same amount. Such a topology has very big advantage over single ended designs. In the output transformer, theoretically currents are equal and opposing, which cancels any DC magnetization. And making the output transformer smaller and without air gap improves low frequency response. Also as currents are equal and opposing any even order distortion will be cancelled and all odd order distortion summed. When running the amp with a dummy load, you can actually hear the transformer vibrating in the odd order distortion. This gives you a good idea about the distortion rating of the amplifier. I consider it good, with this design.

The output stage is a very typical topology you can find all over the internet. It’s just a couple of EL84`s working in push pull configuration in a pentode mode. I`ve made it with a fourth tube which I haven’t included in the circuit. It`s a magic eye indicator tube to give a rough estimate on the output level.