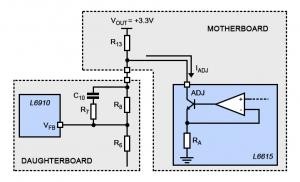 Load sharing is a technique commonly used when powering loads requiring low voltage and high current; for this reason a modular power system is built where two (or more) power supplies or DC-DC converters are paralleled and supply the load.

Sharing the output currents is useful to equalize the thermal stress of the different modules providing an advantage in terms of electronic components reliability (mean time between failure roughly doubles every 10°C decrease in operating temperature).

In this application, load sharing control is entrusted to ST's L6615 [1] that features automatic master-slave current sharing control [2] [3]: the supply that delivers the highest current (sensed by means of an external resistor) acts as the master and drives a common reference (share bus) to a voltage proportional to its output current; the feedback voltage of the others paralleled power supplies (slaves) is then trimmed by an "adjustment" network so that they can support their amount of load current. The slave supplies work as current-controlled current sources.


Moreover a paralleled supply architecture allows achieving redundancy (a system of paralleled power supplies, each delivering a current lower than its nominal capability); the failure of one of the modules can be tolerated until the capability of the remaining power supplies is enough to provide the required load current. In this way an interruptible power supply will be designed, reducing the failure rate of the output bus.

In hot-swappable applications, whenever a section fails, it has to be removed and replaced without turning off the system and causing significant perturbation to both input and output system buses.

At insertion, each section exhibits a certain amount of discharged capacitance between the input terminals: if no inrush current limiting protection is implemented, this will cause a large negative drop on the input bus voltage (the analysis of this issue is beyond the purpose of this document).

The same problem occurs on the output side whenever the load is already supplied by other running sections: the discharged output capacitors of the inserted section are a very low impedance that can generate a negative drop on the load bus. This could trigger the UV/OC protection or cause a false value if a logic circuit reads the power supply output voltage at its input.