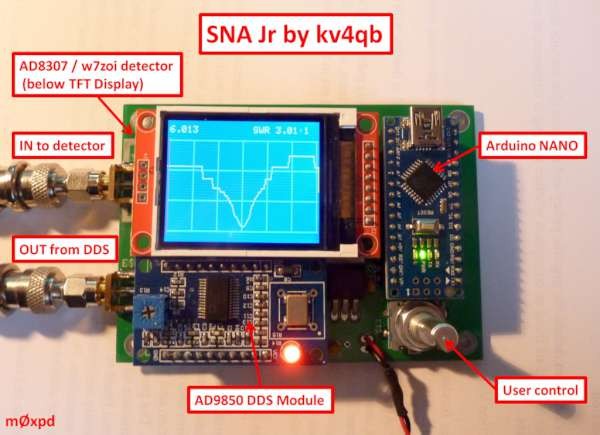 DuWayne’s baby uses an AD9850 in one of our familiar modules to generate RF, under the control of an Arduino NANO. You can read on DuWayne’s blog how the SNA Jr is the descendant of earlier experiments in which an Si5351 was used as the signal source.


In the SNA Jr, the output from the DDS is fed to the device under test and the returned signal is observed in a detector system. DuWayne has ‘history’ in using simple diode detectors in this role (and I was praising kv4qb for this minimalist approach in my talk at Dayton) – again, you can read about this lineage. However, the SNA Jr now replaces the earlier simple diode detector with a fancy AD8307 detector, in the well-known Wes Hayward, w7zoi, circuit. This gives superior performance in terms of dynamic range and ‘linearity’. Also, with the availability of cheap AD8307s (of dubious parentage) from China, this option is also becoming attractive for cheapskates like me! [I have some Chinese AD8307s on order and will report back on performance when the slow boat docks.]