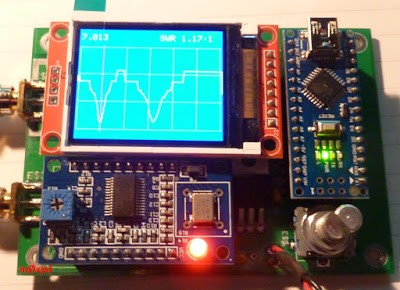 I have (finally) got round to building my own instance of DuWayne, KV4QB‘s prize-winning Scalar Network Analyser Jr:

and a great little instrument it is too!

DuWayne and I have been corresponding for a couple of years, sharing mutual interests. I was pleased to be able to give his work a shout in both the printed and  ‘spoken’ version of my talk at this year’s Four Days in May event in Dayton and – more importantly – to catch up with the man in person for a quick eyeball QSO. I also got a PCB for SNA Jr, which has been sitting on the bench for months – until last week.

The SNA board finally bubbled up to the top of the pile and I looked around for the bits I needed to complete it. Perhaps I should explain (to those of you who don’t know) what’s involved… 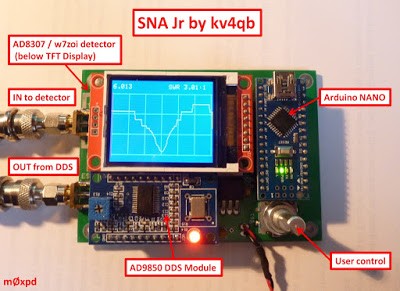 DuWayne’s baby uses an AD9850 in one of our familiar modules to generate RF, under the control of an Arduino NANO. You can read on DuWayne’s blog how the SNA Jr is the descendant of earlier experiments in which an Si5351 was used as the signal source.

In the SNA Jr, the output from the DDS is fed to the device under test and the returned signal is observed in a detector system. DuWayne has ‘history’ in using simple diode detectors in this role (and I was praising kv4qb for this minimalist approach in my talk at Dayton) – again, you can read about this lineage. However, the SNA Jr now replaces the earlier simple diode detector with a fancy AD8307 detector, in the well-known Wes Hayward, w7zoi, circuit. This gives superior performance in terms of dynamic range and ‘linearity’. Also, with the availability of cheap AD8307s (of dubious parentage) from China, this option is also becoming attractive for cheapskates like me! [I have some Chinese AD8307s on order and will report back on performance when the slow boat docks.]

You can’t see the detector in the photo above, because it lurks under the screen – so here’s another shot (with apologies for my wayward handling of some of the SMT devices): 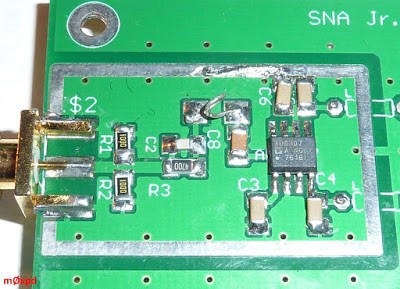 The detector is supposed to be enclosed in a screening can, which I haven’t made yet – so final performance will be better than I’m going to show you below.

The DDS RF source and measurement of the RF level returned from the device under test are all under the control of the little Arduino NANO, which runs a sketch provided by DuWayne. This sketch compiled for me under Arduino 1.6.12. The user interface is provided through just a rotary encoder and the 1.8 inch TFT screen.

I found I had everything needed to build SNA Jr in the ‘junk box’ – except the screen and a spare NANO, so these were quickly ordered through usual suppliers.

The result, as you see above, was simple to put together and works very well.


DuWayne’s software offers a number of options, including a ‘signal generator’ mode, in which the output of the DDS module is set at a single frequency, whilst the returned RF amplitude is displayed numerically and on a bar display (useful when the numerical display is flicking between two values). This mode is illustrated in the graphic below, which shows the system driving a simple switched attenuator, seen in the graphic, with and without 20dB of attenuation switched in (two 10 dB stages). 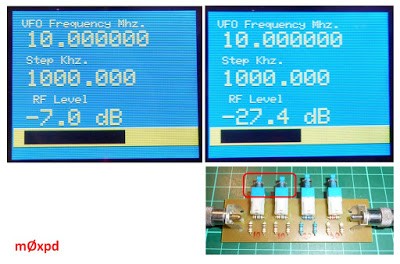 I’m sure the (in)accuracy of the -20dB step is down to my cheapskate attenuator (with its low tolerance resistors, lack of screening etc.), rather than SNA Jr.

Another, more important series of modes sets the DDS module generating RF sweeps, which result in graphical displays. These are illustrated below, in which I’ve contrived a test of the low pass filter which has been conditioning the output of the ‘connected beacon’ (Blogs passim) on 30m. 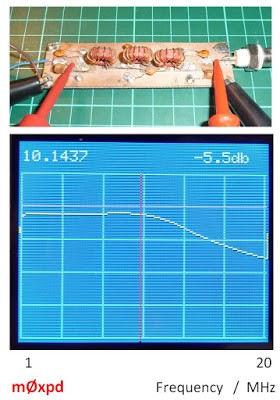 SNA Jr can also be used with various ‘attachments’ such as a 40dB tap (with which DuWayne’s software allows it to function as an RF Power Meter) or a Return Loss Bridge, with which it can perform SWR Scans.

Here’s a scan looking into my (g5rv) antenna, with (right) and without (left) the Made-from-Junk ‘Deluxe’ Versa Tuner II switching in tuning appropriate for operation at the CW end of 40m… 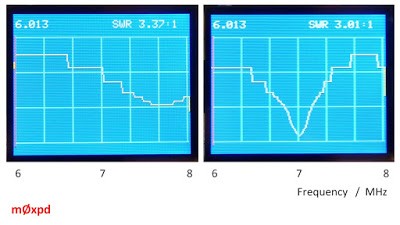 As you see from my additional labeling in the graphic above, the scan was set up to run from 6 to 8 MHz. I reported an equivalent measurement on my own system (originally reported here) in one of my slides at FDIM (although it was presented in terms of Reflection Coefficient, rather than SWR)… 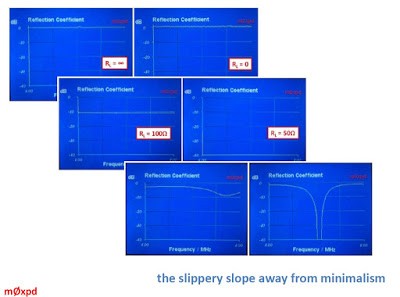 There’s even more to SNA Jr – it can even locate minima to impersonate a dip meter (but I haven’t been able to try this yet).

I said at the beginning of this post that SNA Jr is ‘prize winning’. DuWayne won the ‘Best in Show’ award at  the homebrew competition at FDIM (which is no mean feat, given the very high standard of the submissions I saw there, in several widely different categories). The prize was well-deserved. 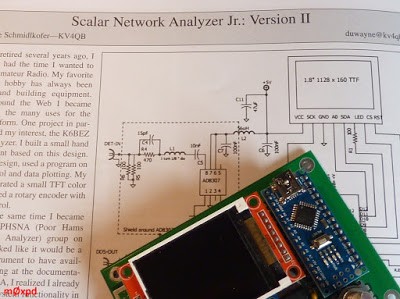 which is nice to read. But the best thing to do is to get the information from DuWayne’s blog and build an SNA Jr for yourself  – or take the inspiration to build something similar.