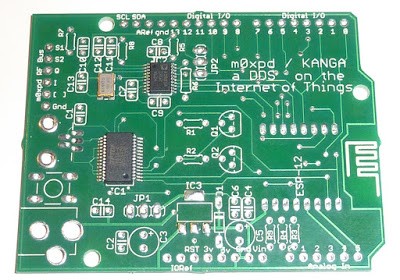 The first sample of the production version of the PCB for the ESP8266 / DDS system arrived a couple of weeks ago.

As you see, it follows the plans established in the earlier prototypes, with the surface mount components already fitted (such that tyros don’t need to face the challenge of dealing with these pesky little things).

I’ve been detained by work and by a short break up in M-land, where I stayed on the banks of the River Nith, playing at being mm0xpd/p. However, now I’m home, I’ve stuffed the new board – this time with the intended 1/8th Watt resistors: 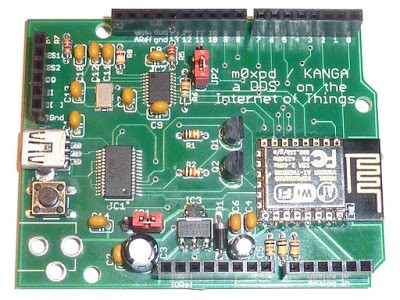 I set her up for a quick test yesterday morning, programming the ESP8266 with my beacon code and plugging a Kanga / m0xpd TX shield on top of the new PCB. Here are the WSPR spots accumulated on 30m in the first thirty minutes (from 09:00 GMT): 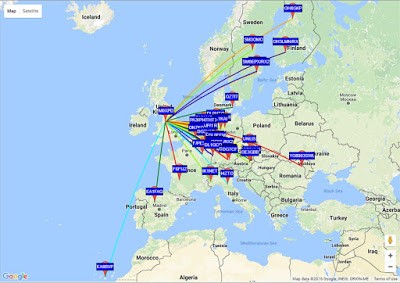 I had a nice time working CW, PSK-31 and even a little SSB on my TS-480 yesterday, so the station was out of commission for beacon operation for most of the day. But I turned the beacon back on in the evening and let it run overnight.

Here are the accumulated 24 hours of spots on 30m … 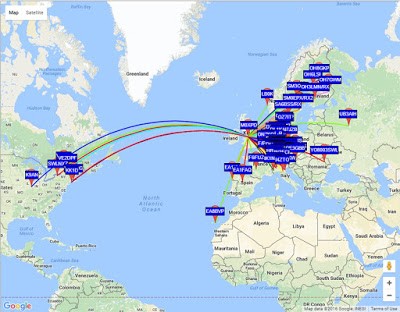 (It looks even better as I write, ‘cos I’m also down to Stewart, w4mo in Venice, FL – but you’ve got to draw the line somewhere).

I hope it won’t be long before Kanga can offer the new board as a kit to anybody interested in playing similar games.