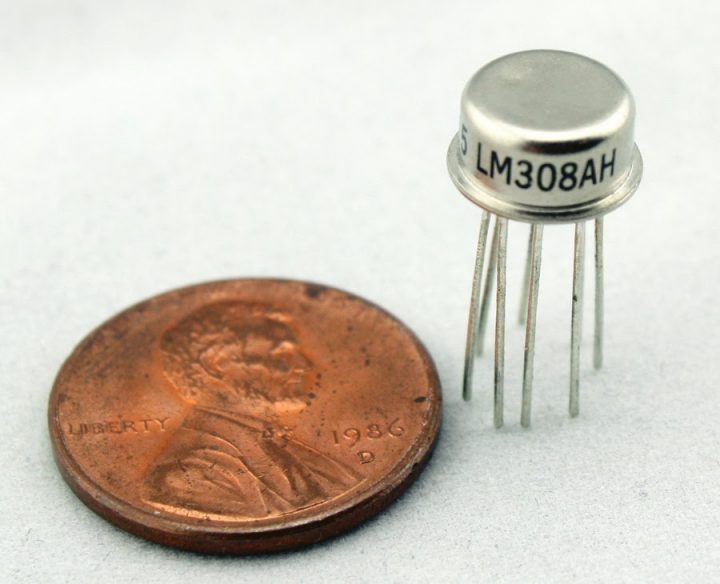 Transistors inside the IC

Transistors are the key components in a chip. The LM108 op amp uses NPN and PNP bipolar transistors, while many newer op amps use low-power CMOS transistors instead.
If you’ve studied electronics, you’ve probably seen a diagram of an NPN transistor like the one below, showing the collector (C), base (B), and emitter (E) of the transistor. A transistor is usually illustrated as a sandwich of P silicon in between two symmetric layers of N silicon; the N-P-N layers make an NPN transistor.
But it turns out that transistors on a chip look nothing like this, and the base often isn’t even in the middle! 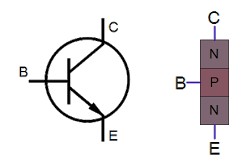 Symbol and oversimplified structure of an NPN transistor.

The photo below shows an NPN transistor on a 741 op amp die.
The different brown and purple colors are regions of silicon that has been doped differently, forming N and P regions.
The whitish-yellow areas are the metal layer of the chip on top of the silicon—these form the wires connecting to the collector, emitter, and base.


Underneath the photo is a cross-section drawing showing approximately how the transistor is constructed. There’s a lot more than just the N-P-N sandwich, but if you look carefully at the vertical cross section below the ‘E’, you can find the N-P-N that forms the transistor. The emitter (E) wire is connected to N+ silicon. Below that is a P layer connected to the base contact (B). And below that is an N+ layer connected (indirectly) to the collector (C). 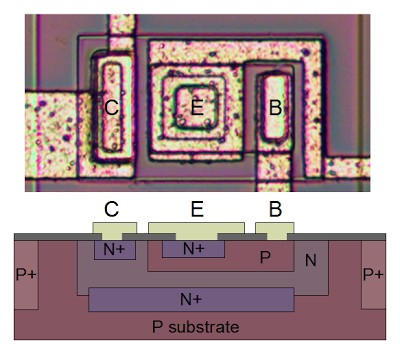 Structure of an NPN transistor in the 741 op amp 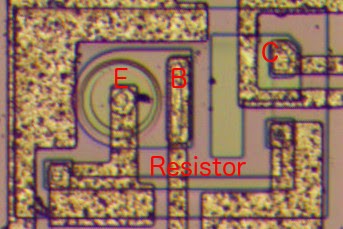 This image shows one of the superbeta transistors in the LM108 op amp. Note the large, round emitter. The green rectangle below the transistor is a resistor.
Previous Page <<2 of 6>> Next Page
BROWSE