The m0xpd bench is full of even more tangles of wire, associated with analog synthesis.

I realised this morning that my new system could be gated by any time sequence, such as that produced by my Morse keyer – it is Funky after all! So, I’ve made the most over-engineered sidetone generator ever.

Here’s the beginning of a ‘CQ’ call… 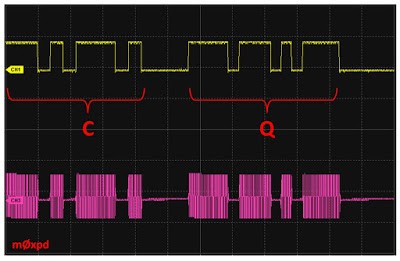 The top trace is the keying waveform, sending the letters C and Q (identified in red for the illiterate amongst you). In the bottom trace is the resulting audio; a 600 Hz tone, produced by the VCO,  modulated by new elements on the bench.

Since last time, I’ve made several new bits of what I’ve decided will be a modular synthesizer. The voltage-controlled filter, which languished on a solderless breadboard, has now been proudly copied onto a piece of Vero stripboard. In fact, there are two of them in a dual configuration. The VCF is filtering the (square) VCO output to make a cleaner signal for our sidetone (analog synthesizers generally use ‘subtractive‘, rather than ‘additive‘ synthesis).

Next, I made a dual low-frequency oscillator on a piece of Vero, to save my trusty Heathkit AF generator from doing all the modulation duties. It isn’t being used in this ‘demo’.

More importantly, a look in the junk box revealed a nice crop of CA3080 Transconductance Amps – so a search on the web found ideas for a Voltage Controlled Amplifier, now implemented on another solderless breadboard. This is what is doing the modulation of the (audio) carrier you see in the image above to generate the ‘CQ’ sound.

Then, I’ve made a (dual) envelope generator, which makes exponential ‘attack’ and ‘release’ profiles at the beginning and end of gating pulses (or, alternatively, of triggers), which can control the VCA. This would usually be controlled by (e.g.) the gate output of a keyboard or sequencer – but in this silly ‘demo’, my morse keyer is gating the VCA. 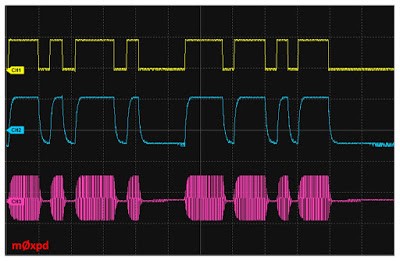 The image above shows the output of the envelope generator in the middle (blue) trace.  This output is used as the control voltage for the VCA, which implements the modulation resulting in the trace seen at the bottom of the image.

Taking it too far, for example by setting an inappropriately long release time, reduces the modulation depth of the CW… 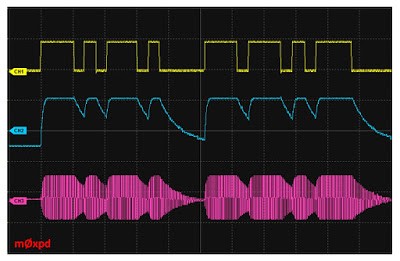 This ‘soft-switching’ of the sidetone takes away the hard, clicking edge associated with simple on/off switching, leaving the resulting waveform easier on the ear [for reasons directly analogous to those which motivate soft keying of RF to avoid spectral splatter]. Readers of long standing might recall that this is something I’ve played with before in building one of my keyers.

Here’s a view of the modules of the synth in the making on the bench, with the modules and some other elements labelled… 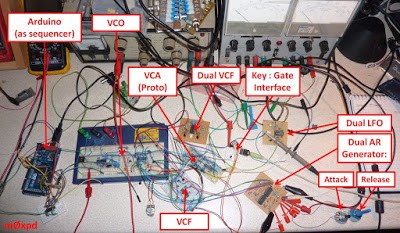 You can see the Attack and Release controls. You can also see a small interface circuit to link between the (open collector) output of the keyer and the 12V positive logic required for the gate input to the Envelope Generator. This is a trivial single transistor.

The mess on the bench does allow half-way serious demonstrations of keying. But you just can’t help applying frequency modulation to the CW and all sorts of other zany effects. There’s music in there somewhere!

I’ve just come back from the West Manchester Club’s Winter ‘Red Rose’ Rally. It used to be held conveniently close to my home, but now it has moved out to Lowton on the East Lancs. I was hoping to get some bits for the synth-to-be, but the Rally was a wash-out in more ways than one. No matter – I know where I can find lots of traders happy to send me all the pots and sockets and other hardware I need to put my circuits into Eurorack compatible modules.