A Modular is Born

I should ‘fess up’. I’ve been having a ball. I’ve been neglectful of the radio arts whilst working up my recent experiments with analog synthesizer elements into something more permanent.

In fact, you caught a glimpse of some of my synth modules on stripboard in my last post. Now, I’ve bent up some mounting brackets from sheet steel and made front panels (in standard ‘Eurorack‘ size) to turn them into pukka modules.

Here, for example, is the evolution of my dual envelope generator module, the circuit of which was inspired by ideas on Ray Wilson’s MFOS site… 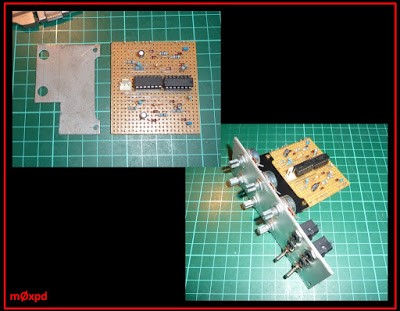 Of course, once in these modules, bringing together some recipe on the bench isn’t quite as untidy as it was before 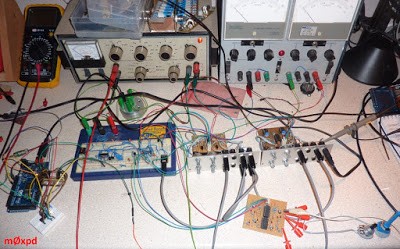 but the real purpose of adopting the (3U) Eurorack standard is such that everything can be mounted in a standard card frame.

This ought to pose a challenge for a notorious cheapskate like m0xpd but – as ever –  it isn’t what you know, it’s who you know. In this instance, we’re indebted to Nigel. A little judicious metalwork (to reduce the depth of the donor frame) and several modules later… 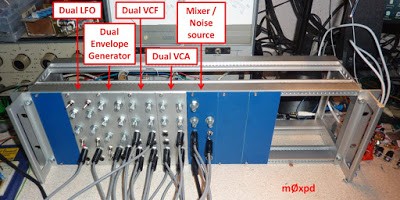 Here you see the current complement of modules, as labelled. With all the inter-connectivity afforded by those 3.5mm jack sockets, you very quickly learn the first rule of modular synthesizers: ‘you can never have enough patch cables’. 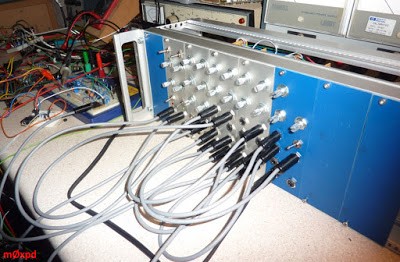 Again, a challenge for the cheapskate (have you seen how much they want for patch cables?!?). Fortunately, I found a nice OM who is selling batches of old-school mono 3.5mm jack plugs on that familiar auction site for bait money – so I’m rolling my own patch cables.

In the image above you can see that the VCO is still in proto form, off to the left of the synth, because I’m still not happy with the performance of this simple oscillator with its (admittedly) simple circuit. 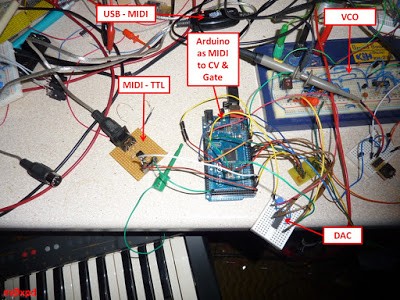 MIDI (from either a keyboard or from a sequencer on the computer, via the USB – MIDI interface) goes through the MIDI to TTL converter shown (which I knocked up with a 4N25 found in the junk box) and into the Arduino MEGA.

It is good that it’s a MEGA because this flavour of Arduino has four UARTs, meaning that I can keep the connection to the PC (for e.g. programming) AND have another serial connection dedicated to MIDI. This isn’t possible on (e.g.) the humbler Arduino UNO.

The Arduino MEGA is now running a MIDI to CV and Gate routine, with which I can make my new modular synthesizer generate all sorts of irritating and occasionally musical sounds.

So – not much radio action to report – but a whole lot of ‘radiophonic‘ fun.