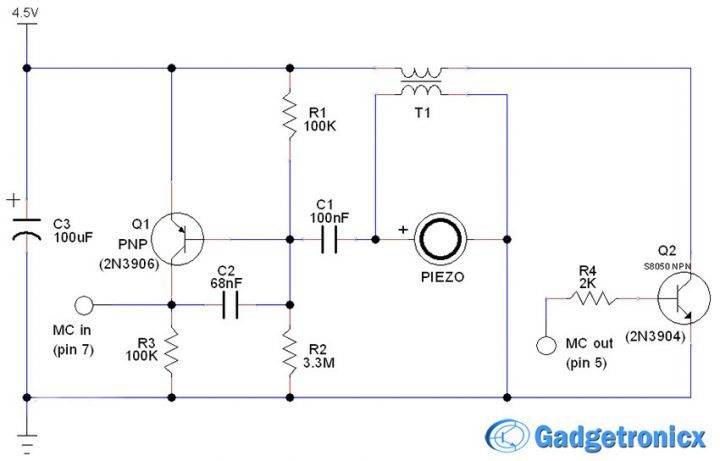 Door or Window alarm circuit have been used widely in many homes to detect intrusion. A simple search in internet might fetch you lot of alarms for you to buy. But making your own alarm will be something special and that’s the purpose of this article. For this article i have reverse engineered a window alarm gadget to obtain the schematic design.

This circuit uses an Microcontroller to detect the input voltage and produce square wave (Explained below). Any MCU with ADC inbuilt will suit for this purpose. Using big MCU’s will be an overkill so i have chosen Atiny85 for this circuit. And i have used Arduino IDE to program it. Here is a step by step instruction to program Atiny85 using Arduino and its IDE.

This circuit uses a Piezoelectric element which should be sticked to a window or door. When someone taps on the window or tries to open it, the vibrations will cause the piezoelectric element in the circuit to vibrate and thus in turn will produce a voltage. This voltage is referenced to ground, so it pulls the base of the PNP transistor Q1 to ground and cause it to open which triggers the Microcontroller (Omitted in the design for simplicity).

Do note that Piezo elements only work with AC ,so higher the turns in the coil better its functionality will be. The alarm can only be turned off by cutting the power supply to the whole circuit. Always turn the circuit ON once you set the circuit to a window or door.

This is the code i have used.

If you intend to use any other MCU. Just use this algorithm to code.

SEE THE EXPLANATION ON REVERSE ENGINEERING AND CIRCUIT BUILDING: